(Toronto, Ontario, March 30, 2021) – Galway Metals Inc. (TSX-V: GWM) (the “Company” or “Galway”) is pleased to report new drill results from the northern veins of the George Murphy Zone (GMZ), and from the nearby Adrian Zone at the Clarence Stream Gold Project in SW New Brunswick  (Figure 1, and Figure 2, and Figure 3). The main takeaways from drill results are as follows:

“The new northern GMZ veins and Adrian Zone discoveries continue to expand and are open in every direction; all zones at Clarence Stream remain open for expansion in all directions. The Adrian Zone now looks to be 450m in strike length, which represents a substantial increase from 102m before the current drill results connected it with the GMZ north veins. The width of the zone remains at 266m, excluding the new GMZ/Adrian veins to the north. These new veins are starting to be drilled with very nice 104.2 g/t, 313.0 g/t, and 147.0 g/t gold assays received. The four highest-grade gold assays received from drilling at Clarence Stream, and nine of the top 12 have been returned from the three new zones discovered by Galway – the Adrian, GMZ and Richard,” cites Robert Hinchcliffe, President and CEO of Galway Metals.

The GMZ North Veins and Adrian Zone is Connected; System is now 2.8 KM

The Adrian, GMZ, Richard and Jubilee Zones have been discovered (or drilled) by Galway after the last resource estimate was released in September 2017. They are successfully being connected; only small gaps remain to be drilled. The new intersections between the veins to the north of the GMZ and the Adrian Zone appear to be connecting the two into one with a horizontal strike length of 450 metres. The northern portion appears to be complicated. While the new intersection of 78.4 g/t Au over 3.0m in hole CL21-89 is located north of and at a higher elevation than the previously reported 33.7 g/t Au over 4.7m (now 24.3 g/t Au over 6.55m) from the same vein (giving a south dip like all the other veins in the system), the discovery hole intersect on the same vein of 13.4 g/t Au over 12.95m is located 21m south of the 24.3 g/t Au over 6.55m and at a higher elevation, giving a north dip. Another hole with what is thought to be the same vein intersected 1.5 g/t Au over 34.3 m (including 25.9 g/t Au over 0.75m-VG), is located at a much higher elevation and is further southeast, also giving a north dip. Folding is thought to be responsible for differing dips.

Galway’s discoveries and subsequent significant expansions of the Adrian (July 29, 2020), GMZ (December 18, 2017) and Richard Zones (January 23, 2019), and the Company’s successful expansions of the Jubilee, North and South Zones demonstrate that Clarence Stream is an emerging new gold district in North America.

Table 1. Assay Results – Holes Were Not Drilled in Numerical Order

VG = visible gold. 0.42 g/t Au was used for the bottom cut-off; True widths are unknown if not noted; all VG samples are done with metallic screen assays; ** previously released. 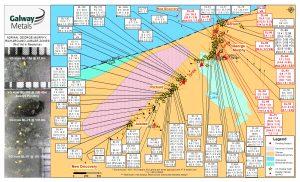 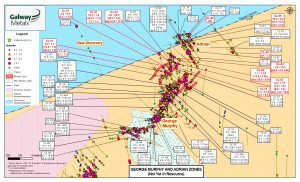 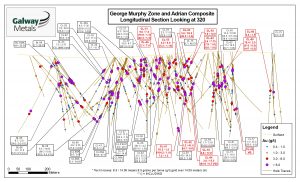