Numerous other intersections reported here are follow-up to the 2 new veins discovered 75 metres and 150 metres north of the George Murphy Zone (April 29, 2020 press release). Additional intersections reported here are new veins discovered north and south of the GMZ, and step-outs to known veins. The latest results are highlighted by:

“Galway has made tremendous progress during the past month. The Company raised $17 million to top up its treasury to $22 million. In doing so, we more than doubled the number of institutional shareholders to approximately 30 and fully-funded our 75,000-metre, 200 hole Clarence Stream drill program through the end of 2021. We also made two new discoveries – one approximately 1.0 km SW and along strike of the Jubilee Zone, Clarence Stream’s western-most known deposit by intersecting 186.5 g/t Au over 0.6m, and we made another new discovery 3.7 km to the NE with 14.4 metres of massive quartz veining hosting 29 splashes of visible gold reported here. We also bought back 2 NSR royalties, of which most payments can be made with Galway shares over a 5-year period. With 5 rigs turning, Galway is looking forward to following up to expand both new discoveries and the known deposits within and beyond the 3.7km-long mineralized system,” cites Robert Hinchcliffe, President and CEO of Galway Metals.

On June 24, Galway announced a different new discovery that returned 186.5 g/t Au over 0.6m, located 950m SW and along strike of the western-most intersection of the Jubilee Zone (Figure 2). That Jubilee intersection had returned 1.9 g/t Au over 43.3m (35.7m true width (TW)), including 21.2 g/t Au over 2.35m, starting at a vertical depth of 36m below surface (September 5, 2019). Another similar vein to the discovery is located 13m further downhole and returned 2.2 g/t Au over 0.7m. Galway plans on following up on this discovery in coming days.

The GMZ is 730m long to date (excludes the new discovery), with multiple structures over 310m horizontal thickness (width), and with all veins open in every direction (Figure 1). The new 14.4 metre quartz vein in hole 65 appears to be associated with a strong magnetic low and with a line of coincident soil anomalies, both located close to the interpreted location of the main structure on the property – the Sawyer Brook Fault (Figure 3). It directly underlies a soil anomaly that gave a grade of 19 ppb. The anomaly is present on the next line 100m to the east that gives it a strike along the magnetic low. It also lines up nicely with another soil anomaly located a further 320m east that grades 53 ppb. The anomalies extend for another 1.6 km east beyond that. They also extend 1.0 km SW of the vein. Soil anomalies, in conjunction with glacial till and stream sediment anomalies led to the discovery of all 5 known gold deposits at Clarence Stream, and the property hosts many other as of yet untested gold anomalies. As Galway continues to make new discoveries, it is becoming apparent that Clarence Stream is an important new gold district in North America.

** previously released; VG = visible gold. 0.42 g/t Au was used for the bottom cut-off; True widths are unknown if not noted. 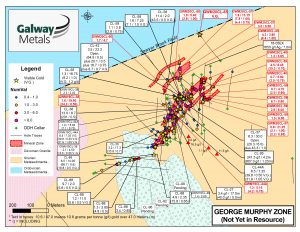 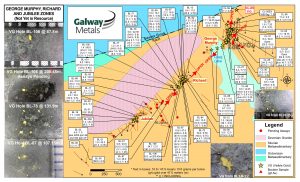 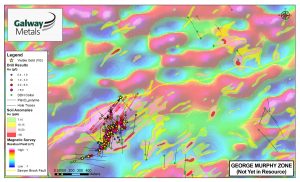 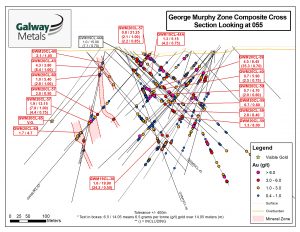 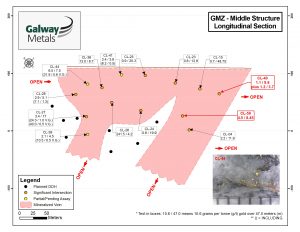 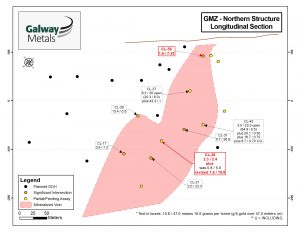