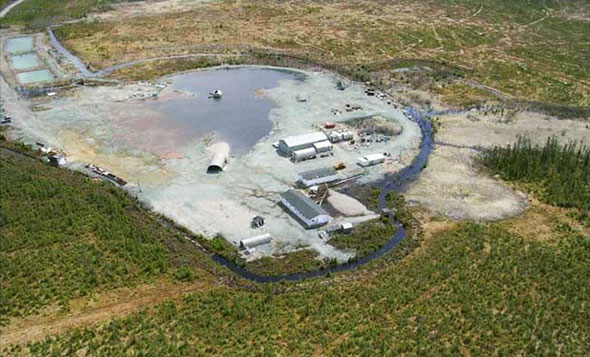 Notes for the Mineral Resource Estimate are provided below.

Four important observations were made by Reno Pressacco, Principal Geologist with RPA Inc. during preparation of the Mineral Resource estimate:

Galway will conduct downhole geophysics on deep hole 21 located below the Main Zone (west of the cross fault and below the mine workings), with follow-up drilling to commence after the winter freeze in January. Galway will also expand the best high-grade new area east of the ramp and cross fault as defined by the 4 strong drill holes in the area—holes 24, 27, 32 and 48 by drilling below and to the west. This area coincides with one of the strong Titan IP/EM chargeability/resistivity anomalies as highlighted in the July 26, 2018 press release (see Figure 1 and Figure 2).  The extent of Galway’s 2019 drill program will depend on market conditions given the prolonged downturn in metal prices and the junior mine exploration resource sector.

RPA Inc. provided a sensitivity analysis on the Base Case Mineral Resource estimate at trailing 12-month average metal prices and the US$/C$ exchange rate. The table below shows that there are negligible differences between the two estimates. Galway considers this to be a reflection of the robust, high-grade nature of the Estrades deposit. The one area where there are differences is in AuEq and ZnEq grades. Compared with the Base Case, the trailing 12-month average price scenario has higher AuEq grades as a result of applying higher zinc prices and lower ZnEq grades in response to using lower gold prices. Grades for each individual metal remained little changed, as did total tonnes.

Quebec: An excellent place to operate in Canada

Quebec is an excellent place to conduct business in the mining industry, having ranked 8th and 9th by the Fraser Institute (2015) in its Investment Attractiveness and Best Practices Mineral Potential indices, respectively, out of 109 locations around the world. Estrades is accessible via Highway 109 and 78 km of gravel roads (most of which is year round), or via Highway 810 and a 7.3 km bush road, although a Bailey bridge over a river would need to be erected to complete the connection. Highway 810 connects to both the Casa Berardi mine and Matagami mill (via Hwy 109), as well as to the town of La Sarre (via Hwy’s 109 and 111). As part of Breakwater’s mine development, power was brought to Estrades, but in the intervening years power lines were taken down. However, two power lines that exist within 25 km of Estrades can be tapped into, thereby re-establishing power to the mine. Quebec’s electricity rates have consistently been second lowest among Canadian provinces, with large-consumer industrial costs as of May 2016 at approximately CDN$0.05/kWh. Quebec has a large and experienced mining labour force, which can be sourced from the nearby towns of Matagami, La Sarre and Amos.

During the preparation of the RPA resource estimate, anew understanding of where the mineralization sits in the stratigraphy was developed. Two mineralized intervals appear to be kept separate by a Key Marker Horizon. It has been logged as an intermediate or mafic unit – often an intrusive. The presence of two separate horizons was recognized in the 2006 Resource estimate, but the scope of that assignment was limited to the Main Zone only, which lessened its impact as, in this area, most of the mineralization sits in the footwall (FW) layer. As work was undertaken along strike to the east through the Central and East Zones, these two layers were traceable along the entire strike length of the Mine Unit package. Two sets of longitudinal section projections are used (one for the hanging wall (HW) layer and one for the FW layer). As mentioned above, most of the mineralization in the Main Zone sits in the FW layer, but the mineralized pods to the east that form the current Mineral Resource can be found in both horizons.

The following is taken from various sections of the Scott Wilson RPA NI 43-101 Technical Report dated November 20, 2006. RPA considers the information in this Estrades and the subsequent Casa Berardi Geology and Mineralization sections to be current and plans on incorporating key elements of it in its updated August 12, 2016 Technical Report that will be published within the next 45 days. The Estrades area is constituted in meta-volcanic and sedimentary rocks of the Harricana-Turgeon Belt (HTB), which is located in the NW part of the Abitibi Subprovince. The regional metamorphism is of greenschist facies. The lithology is generally east-west striking and vertically dipping. Rocks of the Estrades Unit and the Taibi sediments (Casa Berardi) are cut by two major ENE to NE trending diabase dykes.

The Main Felsic Unit refers to the immediate felsic volcanoclastic hanging wall and footwall rocks that envelope the Estrades Unit. The Main Felsic Unit is referred to as a felsic schist or felsic tuff or lapilli tuff, depending on the degree of deformation. The common fragmental appearance of this unit is generally deformation induced, and does not represent a primary pyroclastic feature. This unit has been described as a rhyolite, mainly schistose, though locally flow-banded. Generally, this unit is light yellow to grey in colour, with variable quartz crystal content, and is typically schistose and/or brecciated.

The stratigraphy of the Estrades Unit is over 5 km wide and known as the Joutel-Raymond Basaltic-Rhyolite Domain. The Estrades Unit is the mineralized unit that includes (from west to east) the West (intersected by two drill holes), Main, Central and East Zones of the Estrades deposit. Alteration is typically a strong pervasive sericite with local chlorite depending on proximity to the stringer zone. Pyrite is the dominant sulphide, however sphalerite is common, as is chalcopyrite and galena. Elevated values of both silver and gold occur in the hanging wall and footwall. This mineralization has been identified as classic Archean age of the syngenetic exhalative type. The deepest drill hole (Hole H-281AW) targeting the Estrades Unit under the mine intersected sulphide mineralization 900 m below surface; it returned 3.3% Zn, 0.5% Cu, 1.1 g/t Au and 38.7 g/t Ag over 1.9 m. The Estrades deposit is covered by glacial silt, clays and sandy gravels of variable thickness.

Main Zone
The Main Zone is mineralized over a strike length of 600 m and extends to at least 650 m below surface with an average width of 3.8 m. All historic production originated in this zone. Pyrite is the predominant sulphide mineral, followed by, in decreasing abundance, sphalerite, chalcopyrite, galena and pyrrhotite. The precious metals content is represented by a silver-gold amalgam, ranging from silver-rich electrum to gold-rich kustelite. There is a major fault associated with the Main Zone deposit, known as the Main Fault, which is the dominant structure within the deposit. The Main Fault strikes 338o and dip 65o SW, separating the Main Zone from the Central and East Zones.

Central Zone
The Central Zone has a strike length of 500 m and an average width of two metres. Drilling to a depth of 400 m indicates a massive sulphide orebody that appears to be cut by several faults. The western limit of the Central Zone appears to terminate against the Main Fault.

East Zone
The East Zone, which lies 100 m east of the Central Zone, has a strike length of 500 m and has been identified to a depth of 600 m. Massive sulphide thicknesses generally range from 1.0 m to 2.5 m.

Newiska Block
A broad sericite-chlorite alteration zone and chalcopyrite-sphalerite stringer mineralization that cuts the felsic volcanic rocks have been intersected in drill holes over a strike length of 3.8 km, with the alteration zone up to 300 m wide. There tends to be a zonation of Zn and Cu mineralization along strike, with drill intersects on the western portion of the Newiska Block being Zn-rich whereas grades to the east have higher Cu values.

Taibi sedimentary rocks are composed of sandstone, siltstone, greywacke and argillite. The unit hosts the Casa Berardi Fault, a four-metres wide graphitic fault with quartz-carbonate veining. Iron formation occurs in the southern portion of the sedimentary package and is evident on magnetic maps as a series of magnetic highs traversing the centre of the property block. This iron formation consists of fine-grained alternating laminae and beds of magnetite and chert. The Casa Berardi sediments are variably sericitized and carbonatized. The alteration increases toward the Casa Berardi Fault where the sediments are strongly sericitized and contain up to 20% ankerite and locally, pyrite, arsenopyrite-bearing, smoky to dark quartz veins containing pyrite and arsenopyrite. Anomalous gold occurs locally.

In compliance with National Instrument 43-101, Mr. Mike Sutton, P.Geo., is the Qualified Person responsible for accuracy. Mr. Reno Pressacco, P. Geo., is the Qualified Person responsible for preparation and disclosure of the Estrades Mineral Resource estimate, and is independent of Galway. The drill core is sawn in half with one half of the core sample shipped to Swastika Laboratories situated in Swastika, ON, which has accreditation of ISO/IEC 17025. The other half of the core is retained for future assay verification. Other QA/QC measures includes the insertion of certified reference standards (gold and polymetallics) and blanks into the sample stream, and the regular re-assaying of pulps and rejects at alternate certified labs. Gold analysis is conducted by fire assay using atomic absorption or gravimetric finish for samples greater than 10 g/Mt gold. Other Metals (Ag, Cu, Pb, Zn, Co, As) have full acid digestion and analyzed by AAS; with over limits (10,000 PPM) analyzed by AAS using method dilutions, and the Silver (Ag) over limits (> 200 ppm) analyzed by fire assay (FA) & gravimetric finish. The laboratory re-assays at least 10% of all samples and additional checks may be run on anomalous values.