(Toronto, Ontario, December 18, 2017) – Galway Metals Inc. (TSX-V: GWM) (the “Company” or “Galway”) is pleased to announce a new discovery of mineralization 2 km east of the Jubilee Zone, and 4 km west of the Clarence Stream South Zone. Partial assay results from the first five holes (831m) include 2.2 grams per tonne of gold over 11.9m (hole GWM17CL-04), and 5.3 grams per tonne of gold over 0.5m (GWM17CL-05-visible gold present). These intersections are located at 120m and 175m below surface, respectively.

Robert Hinchcliffe, President and CEO of Galway Metals, said, “Discovering yet another new zone of mineralization is extremely positive for our project. So far, every soil anomaly tested to date overlies mineralization. This increases the urgency to test the numerous other soil anomalies, many of which are stronger than those found above the four zones of mineralization found to date.”

The new discovery was found by drilling in the immediate vicinity of a 700m long soil anomaly where boulders were found by George Murphy (prospector) that contained gold. There appears to be two zones that trend the same direction as the Jubilee and Clarence South Zones. The dip is uncertain but the angles of the quartz veins to the core is 30-70 degrees. The mineralization consists of 10-70% quartz stockworks and veins with 1-2% fine pyrite plus pyrrhotite plus arsenopyrite in sericite altered sediments. Of note is the existence of a massive zone of quartz (70-100% generally) in hole 3 from 16-47m that only assayed anomalously. This new zone will be named the George Murphy Zone. Figure 1 shows the location of the new discovery relative to other zones and soil anomalies. Figure 2 shows the holes and the 300m gap in drilling between the zones in holes 4-5 and the zones in holes 1-3. This gap is up-ice from the boulders that assayed 16.5 g/t, 11.5 g/t, and 7.9 g/t for gold. Unlike the South Zone and Jubilee Zone, this new discovery is located north of the Sawyer Brook Fault. Galway will drill immediately, to determine continuity of this new zone toward surface, filling in the 300m gap and along strike.

Assays have also been received from Galway’s 11-hole, 1,766-metre drill program designed to follow up on previous gold intersections reported by Jubilee Gold and Union Gold. Partial assays from the first two were previously reported on October 12, 2017.

*erroneously previously reported as 8.9; hole 9 had no significant value; No upper cutoff grade was applied; 0.42 g/t was used for the bottom cut-off; True widths are unknown

At least three horizons of mineralization appear to be present. In general, the zones appear to trend in the same direction as the South Zone, and it appears that the zones could be dipping to the South at ~45°. Figure 3 shows the locations of the new intersections.

Jubilee Geology and Mineralization
Jubilee geology and mineralization can be found on Galway’s website at www.galwaymetalsinc.com.

Review by Qualified Person, Quality Control and Reports
Michael Sutton, P.Geo., is the Qualified Person who supervised the preparation of the scientific and technical disclosure in this news release on behalf of Galway Metals Inc. All core, chip/boulder samples, and soil samples are assayed by Activation Laboratories, 41 Bittern Street, Ancaster, Ontario, Canada, who have ISO/IEC 17025 accreditation. All core is under watch from the drill site to the core processing facility. All samples are assayed for gold by Fire Assay, with gravimetric finish, and other elements assayed using ICP. The Company’s QA/QC program includes the regular insertion of blanks and standards into the sample shipments, as well as instructions for duplication. Standards, blanks and duplicates are inserted at one per 20 samples. Approximately five percent (5%) of the pulps and rejects are sent for check assaying at a second lab with the results averaged and intersections updated when received. Core recovery in the mineralized zones has averaged 99%.

About the Company
Galway Metals is well capitalized with two gold projects in Canada, Clarence Stream, an emerging gold district in New Brunswick, and Estrades, the former producing, high-grade VMS mine in Quebec. The Company began trading on January 4, 2013, after the successful spinout to existing shareholders from Galway Resources following the completion of the US$340 million sale of that company. With substantially the same management team and Board of Directors, Galway Metals is keenly intent on creating similar value as it had with Galway Resources. 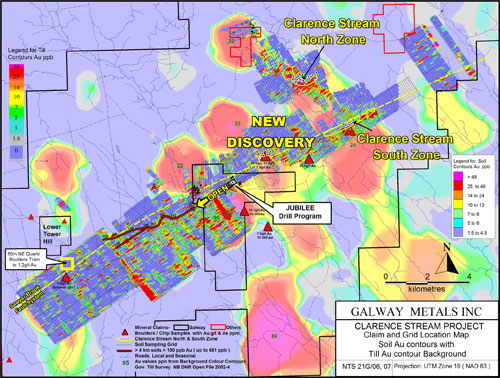 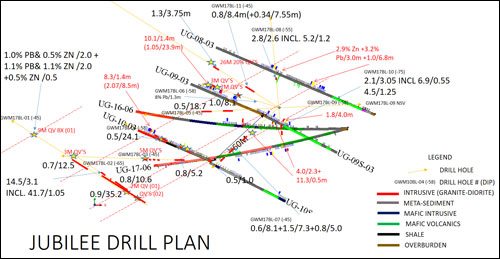