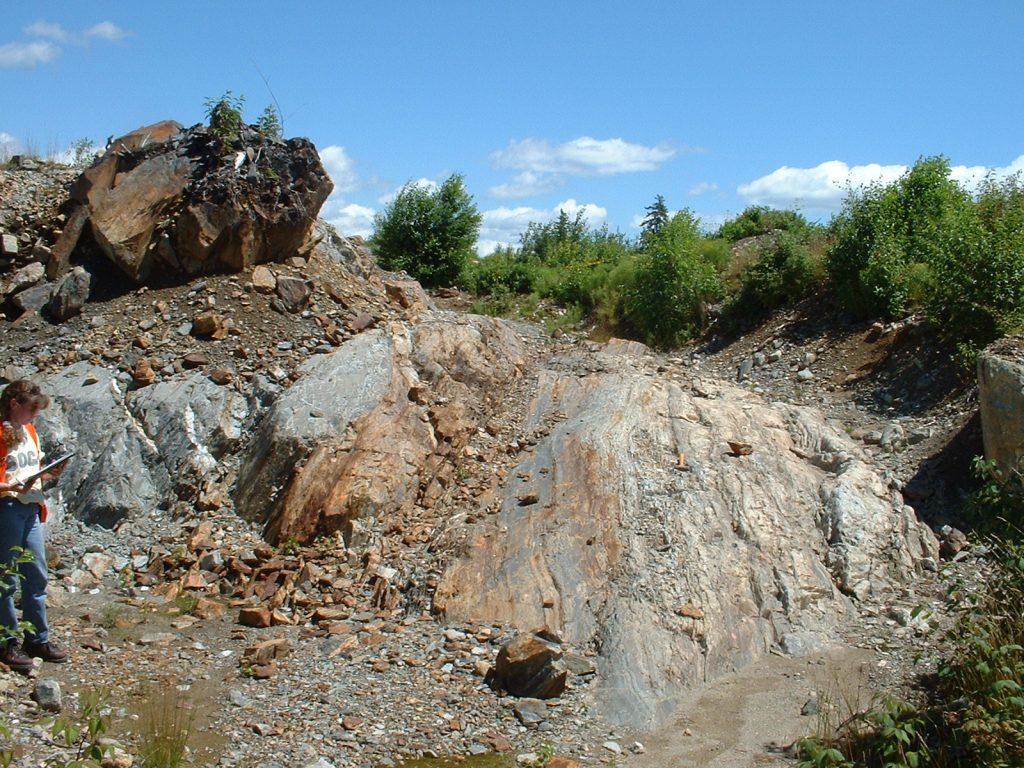 Galway Metals has a 100% undivided interest in the Clarence Stream gold project, which is located 70 kilometres (km) south-southwest of Fredericton in south-western New Brunswick, Canada. Galway’s land position comprises 60,465 hectares (149,412 acres) with 65 km of strike length (and a width of up to 28 km) along the Sawyer Brook Fault System, which straddles several intrusives that are believed to have created the conditions necessary for gold deposition.

Notes for the Clarence Stream Resource

Initial metallurgical test results for gold and antimony estimated recoveries using gravity, flotation and conventional carbon-in-leach (CIL) milling at more than 90% for both the South and North Zones. As with the need for more exploration to gain insight into the ultimate size of the Clarence Stream resource, Galway believes more metallurgical testing is also required. Galway’s property is adjacent to the Mount Pleasant tin-tungsten-molybdenum mine and mill, which closed in 1985. Although the gravity concentrators, flotation cells and the ball mill has been sold, mill infrastructure remains intact, and the property has a fully permitted tailings facility, power line and buildings. Strategically, Galway has reached an agreement to lease space within the mill buildings, as well as outside, for core, chip sample, pulp and reject storage, and for core splitting and logging purposes, among other requirements.

New Brunswick: An Excellent Place to Operate in Canada

New Brunswick is well known as a mining-friendly jurisdiction. The Clarence Stream property is accessible via airports at Fredericton and Saint John, via Provincial Highway 770 that bisects the property and rail. Also bisecting the property is a major power line, which services Clarence Stream and the neighbouring Mount Pleasant Mine and Mill as well. Employees, services and supplies will be sourced from nearby towns of St. Stephen, St. Andrews and St. George and a major seaport is located at Saint John 110 km to the east.

Jubilee: Galway acquired the Birneys Lake project at Clarence Stream for CDN$200,000 plus a 1% NSR royalty with a buyback option for half (0.5%) at any time for CDN$500,000.
Globex: Galway acquired the Lower Tower Hill Property from Globex Mining Enterprises for 260,000 shares, plus a 2.5% Gross Metal Royalty
Staking: Galway staked 1,958 claims to the east and west along the prospective Sawyer Brook Fault System and associated intrusives for CDN$117,480. This added approximately 30 km of prospective ground for future exploration (included in the 65 km total).
Wolfden: Galway has the option to acquire 100% of Wolfden’s interest in the Clarence Stream property by making the following payments:

Clarence Stream is located along and controlled by, the Sawyer Brook Fault boundary of the Gander and Avalon terranes of the Canadian Appalachians in Palaeozoic age intrusive and sedimentary rocks, which are the primary hosts of gold mineralization. The deposits are intrusion-related quartz-vein hosted fault-controlled gold with pyrite, base metal sulphides, and stibnite plus anomalous concentrations of bismuth, arsenic, antimony and tungsten, with sericitization and chloritization. Gold is present in two main areas—the South Zone along the Sawyer Brook Fault and the North Zone 3.5 km NW. The South Zone is steeply dipping, east-northeast trending, with two horizons identified to date, and multiple shoots extending over more than 2.5 km with the resource extending to a maximum depth of 336 metres to date along contacts and within sheared and altered metagabbro and microgranite sills and dikes that crosscut the meta-sedimentary rocks and are related to the Saint George Batholith to the south (presence of hornfels + veined and altered auriferous microgranite dikes + high concentrations of Bi, As and Sb). The North Zone consists of four lenses that appear to be part of the same shallow dipping horizon up to 37.4 metres thick within a one km by two km area to a maximum depth of 90 metres, and is hosted within metagreywacke and argillite, and in quartz veins with stringers and semi-massive stibnite, arsenopyrite, and pyrite.