(Toronto, Ontario, February 20, 2017) – Galway Metals Inc. (TSX-V: GWM) (the “Company” or “Galway”) is pleased to announce additional intersections from the new discovery of mineralization at Clarence Stream in SW New Brunswick, 2 km east of the Jubilee Zone and 4 km west of the South Zone—known as the George Murphy Zone. There are now four drill holes that have intersected two sections, with three on one section and one on the other. The new intersect of 0.7 grams per tonne (g/t) gold (Au) over 48.8 metres (m) (hole GWM18CL-15) is on one section and is located 63.5 to 98 metres above the previously reported intersect of 2.2 g/t Au over 11.9m (GWM17CL-04) and 93 metres north of the previously reported intersect of 5.3 g/t Au over 0.5m (GWM17CL-05-visible gold present). The other section was identified by the new intersect of 2.1 g/t Au over 7.6m (GWM17CL-02), which is located 300 metres west of the 5.3 g/t Au over 0.5m, and there has not yet been any drilling in between  (Figure 1 and Figure 2). Drill hole GWM18CL-17 has been drilled below hole GWM17CL-02 and intersected visible gold at downhole depths of 63.30m and 134.60m, with assays pending. The latter intersection likely correlates with the 2.1 g/t over 7.6m in hole GWM17CL-02 located 65m above. The initial release of rushed assays from this new discovery on December 18, 2017 only reported partial assay results from the first five holes.

Robert Hinchcliffe, President and CEO of Galway Metals, said, “Galway is poised to unlock the exploration potential of its vast land package, where soil sampling works very well to identify major deposits, just as it does in Nevada, the Yukon, and many other places around the world. The exploration priority going forward will be to continue following the trends along which the four deposits to date have been found. Having wide intersections in new discoveries that are really shallow—in this case at 22 metres below surface—can add value quickly. We’ve been at Clarence Stream for eighteen months, have already reported over a 50% increase in the gold resource. We are excited about the next eighteen months and the prospect of building a new gold district in New Brunswick.”

The new discovery was found by drilling in the immediate vicinity of a 700m long soil anomaly where boulders containing gold were found by prospector George Murphy. There appears to be at least two zones that trend the same NE-SW direction as the Jubilee and South Zones. On September 26, 2017, Galway issued a resource update at Clarence Stream, which now includes pit-constrained resources of 352,200 ounces of Measured and Indicated plus 153,100 ounces of Inferred, each at 1.9 g/t gold. The underground gold resource contains an additional 37,800 ounces at 4.4 g/t of Measured and Indicated plus 124,100 ounces at 4.5 g/t of Inferred (estimate prepared by SRK Consulting (U.S.), Inc.). The George Murphy and Jubilee zones are not part of the property resource.

The dip is uncertain but the angles of the quartz veins to the core is 30-70 degrees. The mineralization consists of 10-70% quartz stockworks and veins with 1-5% fine pyrite plus pyrrhotite plus arsenopyrite in sericite altered sediments. Of note is the existence of a massive zone of quartz (70-100% generally) in hole 3 from 16-47m that only assayed anomalously. Figure 1 shows the location of the new discovery relative to other zones and soil anomalies. Figure 2 shows the holes and the 300m gap in drilling between the zones in holes 15, 4 and 5 and the zones in holes 1-3. This gap is up-ice from the boulders that assayed 16.5 g/t, 11.5 g/t, and 7.9 g/t for gold. Like the North Zone, this new discovery is located north of the Sawyer Brook Fault.

*VG (visible gold)—assayed by metallic screens method. **Previously released. Drill holes 1 and 3 contained anomalous assays up to 348 ppb; No upper cutoff grade was applied; 0.42 g/t Au was used for the bottom cut-off; True widths are unknown, but if the dips are vertical as interpreted, then it would be 70% of down-hole width.

Holes GWM17CL-06 and 08 to 14 were drilled south of the discovery to check for the presence of the South Zone, which is south of the Sawyer Brook Fault. Some low-grade intersections were returned but the South Zone has not yet definitively been found in this area. Hole GWM18CL-13 contains a 63.1 metre section of veined and stockwork quartz veining with 1-3% sulphides but the best assay is only 0.6 g/t over 0.5m, while hole GWM17CL-10 contained a 1 metre quartz vein near a sediment-gabbro contact (characteristic of the South Zone) with 1-3% sulphides that didn’t run.

Investors are welcomed to visit Galway’s team during the PDAC at Booth 2623A on Sunday and Monday, March 4th and 5th, and at the Core Shack on Tuesday and Wednesday, March 6th and 7th. 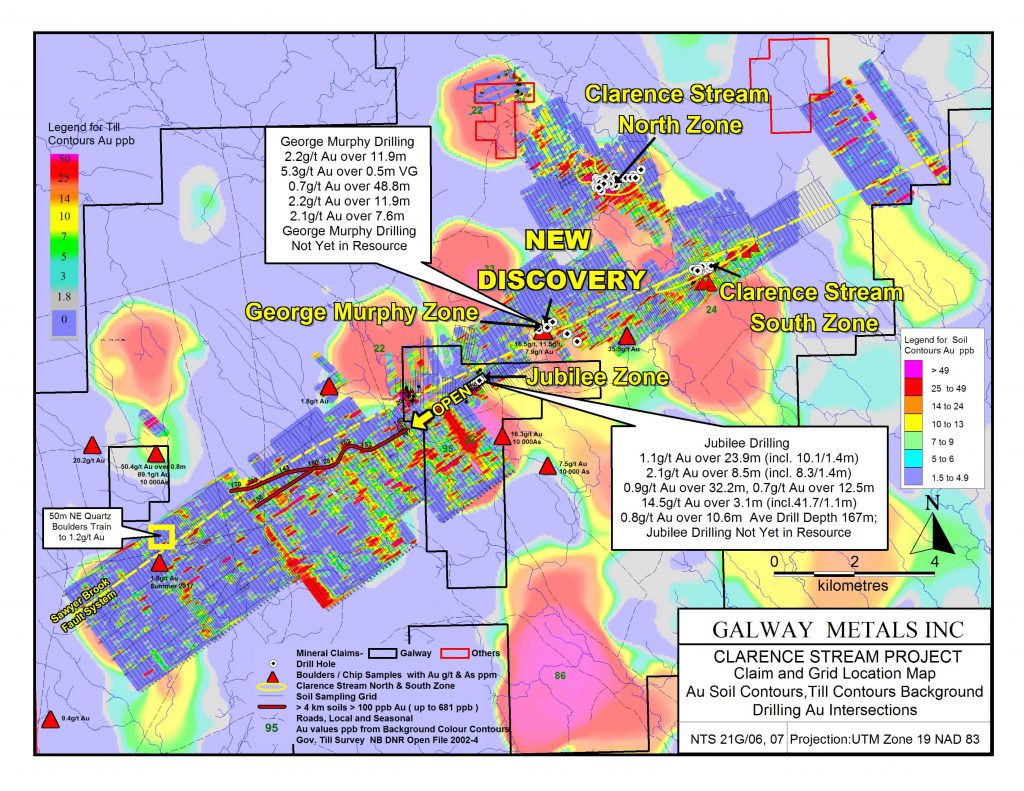 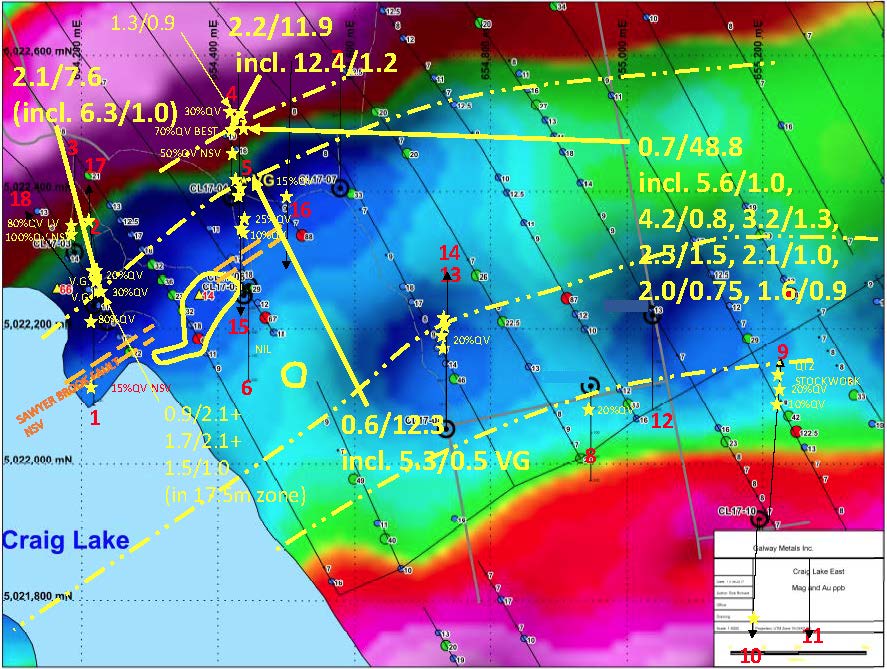