Highlights of the latest drill results, which are not included in the updated resource, are as follows:

Robert Hinchcliffe, President and CEO of Galway Metals, said, “Clarence Stream contains a high-grade pit-constrained resource that we believe can be significantly expanded, and also contains the potential for satellite discoveries along the Sawyer Brook Fault System. Looking at the latest drill results, with widths up to 43.0 meters at 100 meters from surface, we see real potential to expand the depth of the pit.”

The resources at Clarence Stream are contained within 2.5-km of Galway’s 65-km strike length. There are many additional strong targets identified that exhibit coincident highly anomalous glacial tills, soils, boulders and chip samples, along magnetic lows. The first satellite target was recently drilled with 11 holes at Jubilee, located five-km southwest of the South Zone, with assays pending. The Company believes that by exploring additional untested targets, a new emerging gold district in New Brunswick could be uncovered.

Notes: Hole CS17-366 is cut to 17.0 /t, while the other South Zone top cuts in this press release are 40.0 g/t; they were determined in different domains as provided by SRK in the resource estimate released September 26, 2017 . The lower cut-off grade for drill intersects provided above, and applied in the pit-constrained resource estimate, was determined by SRK at 0.42 g/t Au. Drill holes AD17-129, 132, 133, and 136, and CS17- 364 did not return significant assays. For a complete list of all Galway drill results at Clarence Stream and the historical drill hole locations, refer to the North Zone table, South Zone table and Historical Drill Location tableon the Company’s website at www.galwaymetalsinc.com.

The drill intersects highlighted below are significant because they enhance the pit-constrained resource by being wider and/or higher-grade than the existing surrounding drill results. For example:

Holes CS17-356, 357, and 361 intersected low-grade intervals similar to surrounding holes. Hole CS17-364 is located in a waste gap between shoots of mineralization.

Clarence Stream is located along, and controlled by, the Sawyer Brook Fault boundary of the Gander and Avalon terranes of the Canadian Appalachians in Palaeozoic age intrusive and sedimentary rocks, which are the primary hosts of gold mineralization. The deposits are intrusion-related quartz-vein hosted fault-controlled gold with pyrite, base metal sulphides, and stibnite plus anomalous concentrations of bismuth, arsenic, antimony and tungsten, with sericitization and chloritization. Gold is present in two main areas-the South Zone along the Sawyer Brook Fault and the North Zone 3.5 km NW. The South Zone is steeply dipping, east-northeast trending, with two horizons identified to date, and multiple shoots extending over more than 2.5 km with the resource extending to a maximum depth of 336 metres to date along contacts and within sheared and altered metagabbro and microgranite sills and dikes that crosscut the meta-sedimentary rocks and are related to the Saint George Batholith to the south (presence of hornfels + veined and altered auriferous microgranite dikes + high concentrations of Bi, As and Sb). The North Zone consists of four lenses that appear to be part of the same shallow dipping horizon up to 37.4 metres thick within a one km by two km area to a maximum depth of 90 metres, and is hosted within metagreywacke and argillite, and in quartz veins with stringers and semi-massive stibnite, arsenopyrite, and pyrite. 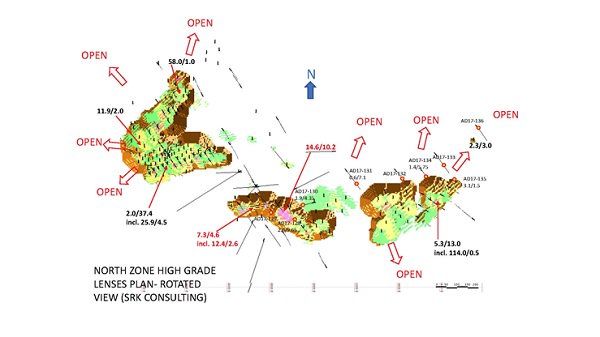 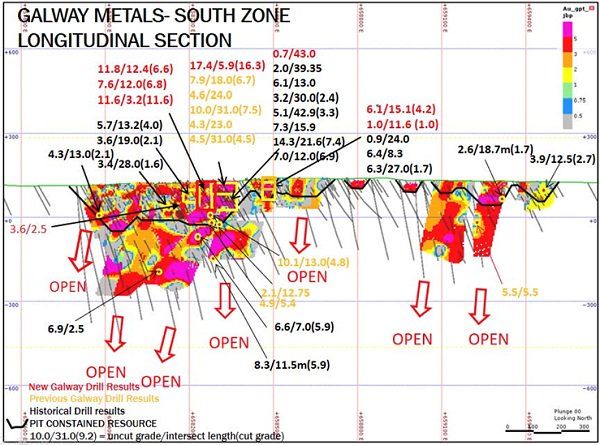