(Toronto, Ontario, April 25, 2022) – Galway Metals Inc. (TSX-V: GWM; OTCQB: GAYMF) (the “Company” or “Galway”) is pleased to report an updated Mineral Resource statement disclosed in accordance with NI43-101 standards, prepared by SLR Consulting (Canada) Ltd. on its Clarence Stream property located in southwest New Brunswick, Canada. The previous resource was disclosed 4½ years ago in September 2017. Since then, 106,272 metres of drilling in 337 holes were undertaken in the new SW Deposit that have contributed to the significant increases in the resource totals. Galway’s objectives over the past 4 years were to make multiple discoveries as exploration moved outward from the North and South Zones, where 100% of the prior resource was located, to demonstrate that Clarence Stream represents an important new gold district in North America. Galway is pleased to note that these objectives have been successfully met. It’s also important to note that all Zones included in the resource update are open for significant expansion. Today’s announcement simply represents a snapshot in time.

“We are very pleased to have taken a major step forward at Clarence Stream. The Indicated and Inferred open pit estimates of 886,000 ounces at 2.27 g/t Au plus 731,000 ounces at 1.93 g/t Au, respectively, is a great start. These resource grades we are reporting compare very favourably to most other pit-constrained resources in the industry. The next step will be the planning of a preliminary economic assessment. Looking forward, the focus of our drilling program is to continue to expand the existing zones that are all open, to follow-up on 3 previously-made discoveries that weren’t included in the resource and to make more discoveries to further enhance this new gold district,” said Robert Hinchcliffe, President and CEO of Galway Metals. “Galway recognizes the importance that New Brunswickers and First Nations place on natural resources and the environment, and we are committed to advancing the Clarence Stream Project in a manner that respects these values. As the project evolves, we are looking forward to engaging our neighbours and First Nations.”

Notes for the Clarence Stream Resource

“We believe that this resource can be significantly expanded and are optimistic about the potential for additional discoveries to further enhance this new gold district. Resources at Clarence Stream are contained within 8.0-km of Galway’s 65-km strike length. There are many additional strong targets identified that exhibit coincident highly anomalous glacial tills, soils, boulders and chip samples, along magnetic lows. Galway used these pathfinders to make all 6 of its discoveries to date; we do not see any reason that, given the large number other similar, and oftentimes stronger pathfinders at Clarence Stream, that other important discoveries won’t be made in the future. Besides any results coming from this exploration, upcoming catalysts would also include metallurgical and ore sorting tests,” cites Mike Sutton, Vice President, Exploration of Galway Metals.

For complete details of the previous resource update, refer to: “NI 43-101 Technical Report on Resources, Clarence Stream Gold Project, Charlotte County, New Brunswick, Canada” with an effective date of August 21, 2017, which is available on the Company’s SEDAR profile at www.sedar.com.

Estrades hosts a high-grade resource that Galway quadrupled since acquisition

In addition to Clarence Stream, Galway also has 100% ownership interest in the former producing, high-grade Estrades volcanogenic massive sulphide (VMS) in the northern Abitibi of western Quebec, Canada. An NI 43-101 Technical Report on the “Mineral Resource Estimate for the Estrades Project, Northwestern Quebec, Canada” dated November 5, 2018, with an amended date of March 15, 2019, was prepared by Roscoe Postle Associates (RPA) and summarized on Table 4.

Full details of the Estrades Mineral Resource are available on the Company’s website at www.galwaymetalsinc.com or SEDAR profile at www.sedar.com.

Table 5: Taken Together, Galway Has Significant High-Grade Resources at Clarence Stream and Estrades

Metal prices used for equivalencies for the Clarence Stream Mineral Resource Estimate are US$1,650/oz Au and US$10,000/tonne Sb. Metal prices used for the Estrades Mineral Resource Estimate were US$1,450/oz Au, US$21.00/oz Ag, US$1.15/lb Zn, US$3.50/lb Cu and US$1.00/lb Pb. Clarence Stream’s Au and Sb are not incorporated in ZnEq; rather, Estrades resources only are in ZnEq.

The significant increases of gold resources at Clarence Stream was driven principally by Galway’s discovery of the Adrian, George Murphy (GMZ) and Richard Zones (Figure 1). Extensive drilling has resulted in the Adrian Zone linking to the GMZ, which links to the Richard Zone, which links to the previously-known Jubilee Zone. These zones now combine for a 3.1km trend of mineralization, which remains open with multiple high-priority targets that Galway plans on following up. These 4 zones are now referred to collectively as the SW Deposit. Also contributing to the resource increase was a lowering of cut-off grades for open pit constrained and underground resources to 0.38 g/t and 2.00 g/t, respectively, from 0.42 g/t and 2.55 g/t previously. These declines in the cut-off grades were driven mostly by an increase in the gold price applied to the resource estimates to $1,650/oz from $1,350/oz. Tighter wireframes around mineralization plus several other small parameter changes also contributed to the resource increase. Figure 2 and Figure 3 provide 3D images of the South and North Zones, respectively.

The New Updated Resource Does Not Include Several Previously-Made Discoveries

Other previously-drilled targets outside the resource that Galway plans on following up on include the following:

The Top 5 Exploration Targets that Haven’t Been Drilled, but Galway Plans to Target Them, Include the Following:

Besides drilling to expand the existing zones, and the new discoveries that are not part of updated resource, a number of high priority targets have yet to be drilled at Clarence Stream that exhibit better evidence for gold deposit discoveries than the evidence that existed prior to any of the discoveries Galway has made to date.

A target is located parallel to and south of the SW Zone. This 12km+ long soil anomaly that hosts 12 soils that returned between 100 and 1030 ppb Au is located along a very strong linear magnetic low, with 7 anomalous boulders that range up to 16.3 g/t Au and 7.5 g/t Au with gabbro as host – similar to the South Zone, plus with the second highest till anomaly on the entire property (95 ppb).

Highlights of the last remaining results of the holes drilled that are included in the resource but were not previously reported are provided below.

Galway would like to acknowledge financial support from the New Brunswick Junior Mining Assistance Program, which partially funded drilling of the SW Deposit.

Clarence Stream deposits can be characterized as intrusion-related, quartz-vein hosted gold deposits. They contain elevated levels of bismuth and arsenopyrite in multiple quartz veins, with significant antimony in the South and North Zones and tungsten in the vicinity. The Zones contain multiple zones of quartz veining with sulfides and sericite alteration. In general, mineralization at Clarence Stream consists of 10-70% quartz stockworks and veins with 1-5% fine pyrite plus pyrrhotite plus arsenopyrite in sericite altered sediments. The South and North Zones also contain stibnite. Locally there is up to 10% sphalerite and semi-massive galena veinlets. The 3.1 km trend that hosts the SW Deposit is associated with a mineralized mafic intrusive locally – similar to the South Zone. A more complete description of Clarence Stream’s geology and mineralization can be found at www.galwaymetalsinc.com.

The Mineral Resource estimates for the North and South deposits were prepared by Mr. Reno Pressacco, P.Geo, SLR Principal Geologist. The Mineral Resource estimate for the Southwest deposit was prepared under the supervision of Ms. Valerie Wilson, M.Sc., P.Geo., SLR Managing Principal Geologist. Mr. Pressacco and Ms. Wilson are Independent Qualified Persons as defined by NI 43-101 and have read and approved the scientific and technical content of this news release as it relates to the updated Mineral Resource estimates. Michael Sutton, P.Geo., Director and VP of Exploration for Galway Metals, is the Qualified Person who supervised the preparation of the scientific and technical disclosure in this news release on behalf of Galway Metals Inc. A NI 43-101 report will be completed within 45 days to support the resource estimate. All core, chip/boulder samples, and soil samples are assayed by Activation Laboratories, located at 41 Bittern Street, Ancaster, Ontario, Canada, Agat Laboratories, located at 5623 McAdam Road, Mississauga Ontario, Canada L4Z 1N9 and 35 General Aviation Road, Timmins, ON P4P 7C3, and/or Swastika Laboratories situated in Swastika, ON. All four labs have ISO/IEC 17025 accreditation. All core is under watch from the drill site to the core processing facility. All samples are assayed for gold by Fire Assay, with gravimetric finish, and other elements assayed using ICP. The Company’s QA/QC program includes the regular insertion of blanks and standards into the sample shipments, as well as instructions for duplication. Standards, blanks and duplicates are inserted at one per 20 samples. Approximately five percent (5%) of the pulps and rejects are sent for check assaying at a second lab with the results averaged and intersections updated when received. Core recovery in the mineralized zones has averaged 99%.

Galway Metals is well capitalized with two projects in Canada: Clarence Stream, an emerging gold district in New Brunswick, and Estrades, the former producing, high-grade, gold-rich VMS polymetallic mine in Quebec. The Company began trading on January 4, 2013, after its successful spinout to existing shareholders from Galway Resources following the completion of the US$340 million sale of that company. With substantially the same management team and Board of Directors, Galway Metals is keenly intent on creating similar value as it had with Galway Resources. 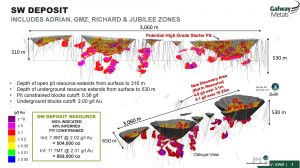 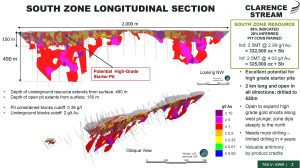 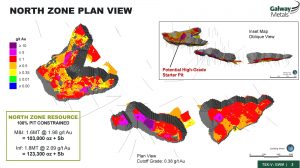 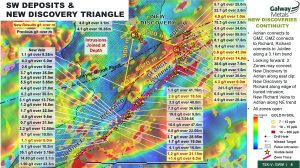 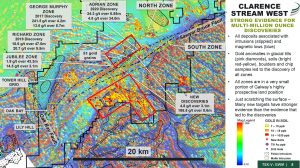