(Toronto, Ontario, May 11, 2020) – Galway Metals Inc. (TSX-V: GWM) (the “Company” or “Galway”) is pleased to report assay results from resource drilling at the Richard Zone, and additional assay results from previous step-out holes 78 and 93, located between the Richard and Jubilee Zones, at the Company’s Clarence Stream project in southwest New Brunswick, Canada (Figure 1, Figure 2 and Figure 3). Highlights are as follows:

Robert Hinchcliffe, President and CEO of Galway Metals, said, “The latest drilling was undertaken at 20-30 metre centres stepping out from the discovery hole, to prove there is good continuity, to identify the plunge of the veins, and to bring in indicated resources. The results are highlighted by good grades and widths in mostly shallow holes. The best assay in each hole lines up in a straight line, which shows a strong westly plunge with excellent continuity (e.g. 38.1/6.5m, 119.0/0.5m, and 33.7/0.9m in 3 holes – see Figure 4). Future drilling will follow this high-grade plunge. The new assays received from previously-released holes have added a good thickness to the Richard Zone’s western-most hole 93, which is similar to the intersections to the east (2.4/30m, 10.6/47m, 4.6/29.65m, 5.5/16.7m, 1.1/27.05m, 1.8/25.9m, etc.). Galway’s continued strong drill results demonstrate that Clarence Stream is an emerging new gold district in North America.”

The intersections in holes 84, 59, and 60 are along the southern-most vein (A – Figure 4). The intersections in holes 58, 67, and 71 are along the middle vein (B – Figure 5). Hole 82 has an intersection on both veins, while the other holes have assays pending on the second vein in each hole. Hole 59 was stopped after the first vein. Many holes targeted the third vein, located furthest north, at 50m centres, and as such resulted in the two southern veins which are located closer to the collar, being drilled at closer centres. 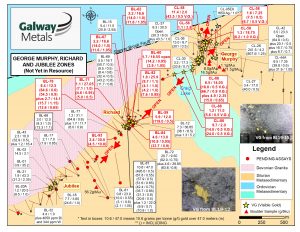 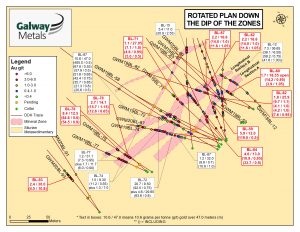 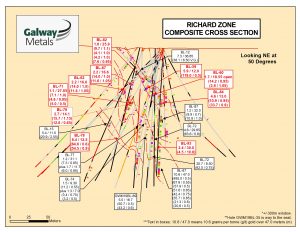 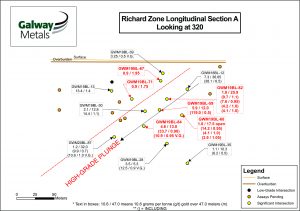 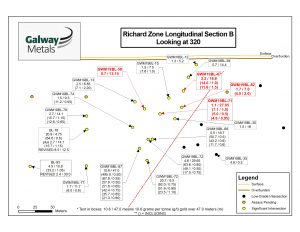