Galway Metals Intersects 3.0 g/t Au Over 12.0m in the 1Km Gap Between Richard and Jubilee at Clarence Stream

(Toronto, Ontario, December 2, 2019) – Galway Metals Inc. (TSX-V: GWM) (the “Company” or “Galway”) is pleased to report assay results from a drill hole located between the recent Richard Zone discovery and the Jubilee Zone. The Richard Zone was first reported in January, 2019, and lies midway between the Jubilee Zone and the Company’s first discovery, the George Murphy Zone (initially reported in December, 2017). It is thought that all 3 zones (the George Murphy, Richard and Jubilee), which cover 2.5 km of strike length, are part of the same system. None of these zones are in the resource. (Figure 1)

Robert Hinchcliffe, President and CEO of Galway Metals, said, “The result from this hole validates Galway’s belief that the 2 Galway discoveries and the Jubilee Zone are part of the same system. We look forward to continuing to drill to expand the various zones at Clarence Stream and the gap areas between the George Murphy, Richard and Jubilee Zones. Galway Metals believes that Clarence Stream is an emerging new gold district in eastern Canada”

(TW=True Widths); True widths are unknown if not noted.

The recent discovery of the Richard Zone in hole 12 contains elevated levels of bismuth, arsenopyrite, and antimony, in multiple quartz veins, with tungsten in the vicinity. This is similar to other Clarence Stream deposits, which can be characterized as intrusion-related quartz-vein hosted gold deposits. Richard Zone contains multiple zones of quartz veining with sulfides and sericite alteration. In general, mineralization at Clarence Stream consists of 10-70% quartz stockworks and veins with 1-5% fine pyrite plus pyrrhotite plus arsenopyrite plus stibnite in sericite altered sediments. The Jubilee mineralization consists of 2%-5% disseminated pyrite, sphalerite, galena, arsenopyrite, chalcopyrite, and pyrrhotite in sediments with white to smoky grey quartz veining. Locally there is up to 10% sphalerite and semi-massive galena veinlets. A more complete description of Clarence Stream’s geology and mineralization can be found at www.galwaymetalsinc.com. 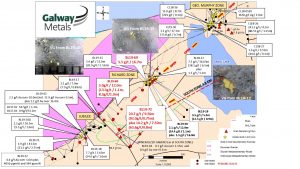