(Toronto, Ontario, April 18, 2019) – Galway Metals Inc. (TSX-V: GWM) (the “Company” or “Galway”) is pleased to report Clarence Stream assay results from two diamond drill holes and partial assay results from four others at the Jubilee Zone, assays that were pending from two holes and full assays from a third at the recently-discovered Richard Zone, plus assays that were pending from two holes at the George Murphy Zone (GMZ) (Figure 1).

Robert Hinchcliffe, President and CEO of Galway Metals, said, “All 5 zones at Clarence Stream have multiple structures with good grades and widths, and all of them remain wide open for expansion. There are also many strong and never-before-drilled targets to probe for new discoveries. As such, Galway has mobilized a 2nd drill rig to the property, which is expected to arrive in coming weeks. Once drilling recommences after the snow melt, Galway’s goal is to initially expand both Richard and Jubilee, with one rig on each zone, and to then drill the recently-discovered Richard Zone with both rigs in order to define a resource there. After that, the 2nd rig will seek to drill high-priority wildcat targets to make additional new discoveries, and to also expand the area north of the North Zone. Having 2 drill rigs provides Galway with significantly more flexibility to make new discoveries and to expand existing zones at Clarence Stream, which we believe is an emerging new gold district in eastern Canada.”

The drill results from Jubilee highlighted below are significant because they contain wide, near-surface intersects, and because they extended the strike length that a resource at Jubilee would cover by approximately 195m to 465m.

The drill results at Richard highlighted below are significant because they were the discovery holes of this recently-discovered Zone, and because new intersections add to the number of structures that exist at Richard.

Jubilee was also extended to the NE by 175 metres with an intersection of 2.1 g/t Au over 7.0m in hole BL19-17. These extensions are point-to-point in the long section and include increases to depth. A resource estimate on Jubilee would cover approximately 465m of strike length compared with 270m previously, representing a 195m increase. Previous to Galway’s initial holes, drilling by Jubilee Gold and Union Gold returned intersections such as 1.1 g/t Au over 23.9m, including 10.1 g/t Au over 1.4m, and 2.1 g/t Au over 8.5m, including 8.3 g/t Au over 1.4m. At least three mineralized structures are present. True widths for all drill holes to date at Jubilee are unknown at this time. (Figure 2).

Galway undertook optical downhole surveys at the Richard Zone to determine structure orientations. However, the survey did not reach several structures, including the main high-grade structure in holes 12 and 15, which was interpreted from drill core to be trending NW-SE. The intersections of 1.4 g/t Au over 9.0m in hole 15, and 1.3 g/t Au over 5.2m in hole 12 appear to be striking NE-SW. A tungsten zone in hole 15 likely lines up with a tungsten-gold zone in hole 13 (2.5 g/t Au over 6.85m), suggesting a strike of ~65° for that structure (full tungsten assays are pending). True widths for all drill holes to date at Richard are unknown at this time.

As a result of the very strong intercepts returned from the Richard Zone, Galway is planning a 4th quarter release of the updated Clarence Stream resource estimate in order to allow time for resource delineation, which will also provide additional time to further expand Jubilee, the GMZ and the North Zones. None of the gold mineralization contained in the GMZ, Richard or Jubilee Zones are in the existing resource, which is currently contained in North and South Zones only. For complete details, refer to “NI 43-101 Technical Report on Resources, Clarence Stream Gold Project, Charlotte County, New Brunswick, Canada” with an effective date of August 21, 2017, available on the Company’s website at www.galwaymetalsinc.com or SEDAR profile at www.sedar.com. 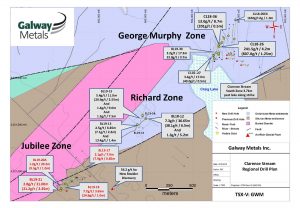 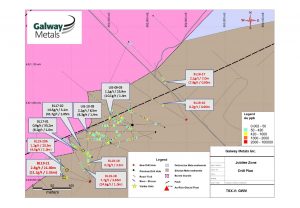 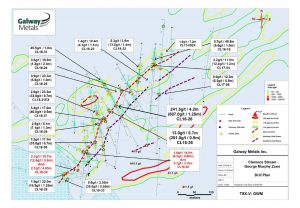