(Toronto, Ontario, February 13, 2019) – Galway Metals Inc. (TSX-V: GWM) (the “Company” or “Galway”) is pleased to report first assays from the brand-new gold discovery at its Clarence Stream Gold Project in SW New Brunswick. Significantly, the new gold zone is in an area where there has been no previous drilling, centered between the George Murphy and Jubilee Zones, approximately 1km from each. This new discovery highlights the importance of Clarence Stream as one of Canada’s most exciting new gold camps. The discovery hole, BL18-12, returned 7.3 g/t Au over 36.7 metres, including 38.1 g/t Au over 6.5 meters in multiple quartz veins containing abundant visible gold, starting only 51 metres downhole and 36 metres vertical (Figure 1).

Drilling in hole BL19-15 also has intersected visible gold (VG) twice, approximately 50 metres NW of and 97 metres vertically below the VG seen in BL18-12 (Figure 2). Assays are pending. The new discovery, in holes BL18-12 and BL19-15, represents the 2nd deposit that Galway has found since the Company began drilling Clarence Stream in October 2016 (the George Murphy Zone (GMZ) being the other), and the fifth deposit identified in the Clarence Stream district to date. Currently, only two of these five deposits, the North and South Zones, are in the existing resource  (September 26, 2017), which is scheduled to be updated in 2019.

“These results exceed even our most optimistic expectations and we stand by our belief that Clarence Stream represents a new district scale opportunity. Last year, the focus was on expanding the mineralization of the newly discovered George Murphy Zone. A few weeks after moving the drill rig, we are on to another new discovery. Not only are we excited by the large, high-grade intercept found close to surface, we are also encouraged by the consistency of the higher-grade interval within that larger intercept. This bodes very well for future exploration of the whole Clarence Stream camp in which Galway controls 65km of the main NE-SW trend. In addition, if the new discovery trends NW-SE, as we believe, that dramatically opens up the possibilities for new deposits along those trends as well as along the main NE-SW trend parallel to the main break, the Sawyer Brook Fault,” cites Robert Hinchcliffe, President and CEO of Galway Metals.

Galway has drilled 3 additional holes in the vicinity of the new discovery. Multiple zones were intersected in the discovery hole. These include intersections of 1.3 g/t Au over 5.2 m, 0.7 over 1.0m, and 7.3 g/t Au over 36.7 m, which included 38.1 g/t Au over 6.5 m. The drill holes located 100m east and 100m west intersected several mineralized zones as well, but they appear to host different mineralization—assays are pending. The fourth hole drilled, hole 15 on which assays are also pending, intersected quartz veining and visible gold in two places located approximately 50 metres horizontally NW of the new discovery and 133 metres vertical (97 metres vertical below the high-grade intercept in hole BL18-12). The intersections of VG in holes 12 and 15, if the same zone, would require a zone trending NW-SE and dipping steeply, or trending more east-west and dipping 60 degrees north. The angle of the vein to the core axes in holes 12 and 15 would favour the NW-SE trend.

Southern New Brunswick hosts both NE-SW trending deposits such as Clarence Stream’s South, George Murphy and Jubilee Zones, and NW-SE trending deposits such as the Bald Hill antimony deposit, the Mount Pleasant tin-tungsten deposit, and Galway’s Clarence Stream North gold deposit. Numerous strong soil anomalies on Galway’s properties also appear to have a NW-SE trend  (Figure 3). Galway will undertake an optical down-hole survey that will interpret the actual orientation of the New Discovery Zone. It should be noted that the soil anomaly that was targeted has only 19 parts per billion (ppb) as its highest value versus much higher values (up to 1,030 ppb) elsewhere throughout the property that have yet to be drilled.

… 56.2 g/t Grab Sample Appears to be Hosted Within One of the Many NW-SE Trends

A grab sample, from a massive angular boulder thought to be approximately in-situ, grades 56.2 g/t Au, located approximately 250 metres SE of the Jubilee Zone and 850 metres SW of the New Discovery Zone. It contained fine VG and is a quartz zone at least 0.5 metres wide and situated within a zone of high-grade gold-in-soils that returned 380ppb, 311ppb, 319ppb, 201ppb and 91ppb that appears to trend NW-SE (Figure 4). For perspective, 10 ppb Au is considered anomalous. Galway plans on following up this discovery with drilling in coming months.

Note: Early exploration activities and results from soil and boulders are preliminary in nature and not necessarily representative of the mineralization hosted on the property, nor are they conclusive evidence of the likelihood of a mineral deposit.

Visible Gold contained in all bolded intersects. 0.42 g/t Au was used for the bottom cut-off; True widths are unknown.

Core of VG from Clarence Stream will be on display at Galway’s PDAC Booth #2623A on Sunday and Monday, March 3rd and 4th.

The new discovery in hole 12 contains elevated levels of bismuth, arsenopyrite, and antimony, with tungsten in the vicinity. This is similar to other Clarence Stream deposits, which can be characterized as intrusion-related quartz-vein hosted gold deposits. Holes 13-15 intersected multiple zones of quartz veining with sulfides and sericite alteration. Hole 12 intersected VG in a 6.5 m zone beginning 51.75 m downhole and hole 15 intersected VG at 190.6m and at 191.9m downhole (Figure 2). In general, mineralization at Clarence Stream consists of 10-70% quartz stockworks and veins with 1-5% fine pyrite plus pyrrhotite plus arsenopyrite in sericite altered sediments. A more complete description of Clarence Stream’s geology and mineralization can be found at www.galwaymetalsinc.com.

Michael Sutton, P.Geo., is the Qualified Person who supervised the preparation of the scientific and technical disclosure in this news release on behalf of Galway Metals Inc. All core, chip/boulder samples, and soil samples are assayed by Activation Laboratories, 41 Bittern Street, Ancaster, Ontario, Canada, who have ISO/IEC 17025 accreditation. All core is under watch from the drill site to the core processing facility. All samples are assayed for gold by Fire Assay, with gravimetric finish, and other elements assayed using ICP. The Company’s QA/QC program includes the regular insertion of blanks and standards into the sample shipments, as well as instructions for duplication. Standards, blanks and duplicates are inserted at one per 20 samples. Approximately five percent (5%) of the pulps and rejects are sent for check assaying at a second lab with the results averaged and intersections updated when received. Core recovery in the mineralized zones has averaged 99%. The soil anomalies may not be representative of the mineralization hosted on the property.

Figure 1: Location of the New Discovery Zone and the 56.2 g/t Au Grab Sample 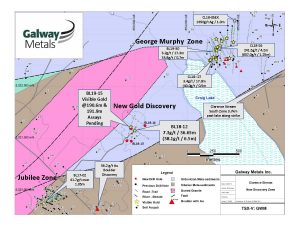 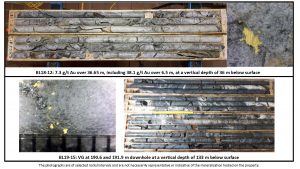 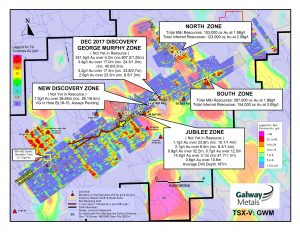 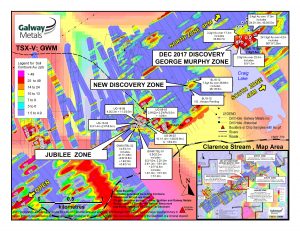