(Toronto, Ontario, June 9, 2021) – Galway Metals Inc. (TSX-V: GWM) (the “Company” or “Galway”) is pleased to report new and updated drill results from holes in the George Murphy Zone (GMZ), and western and northern extensions of it at the Clarence Stream Gold Project in SW New Brunswick; the eastern-most intersection at the Adrian Zone that was previously-reported to host abundant visible gold (VG) in hole CL21-92 has also been returned (Figure 1, Figure 2, and Figure 3).

“The results continue to come in with robust widths and grades. This is seen in the George Murphy Zone and in the northern GMZ as it connects with the new Adrian Zone. These results should bode well for our upcoming resource estimate scheduled for the 3rd quarter,” cites Robert Hinchcliffe, President and CEO of Galway Metals.

Galway’s recently-discovered Adrian Zone has expanded NE and to depth with hole 92, which intersected 22.7 g/t Au over 3.5m and 24.6 g/t Au over 3.0m. The abundant quartz veining in previously-released hole 77 that returned 1.3 g/t Au over 35.3m appears to be flat-lying – correlating with the shallow intersection in hole 92.

The GMZ, Richard and Jubilee are Part of the Same 2.8 km Long System

Galway’s George Murphy Zone discovery was initially reported in December 2017, but drilling stopped a year later following the discovery of the Richard Zone, which was first reported in January 2019. Drilling at the GMZ resumed in mid-November 2019. The plunge of all zones to date in the Jubilee, Richard, and GMZ are thought to be to the west and, with the recently added Adrian Zone are part of the same 2.8 km long system. The GMZ is 765m long to date, with multiple structures over 310m wide, and with all zones at Clarence Stream open in every direction.

The Adrian, GMZ, Richard and Jubilee Zones have been discovered (or drilled) by Galway after the last resource estimate was released in September 2017, and will be included in the upcoming resource estimate scheduled for the 3rd quarter. The discovery of these zones, and their subsequent expansions, demonstrate that Clarence Stream is an emerging new gold district in North America.

**= previously released; VG = visible gold. 0.42 g/t Au was used for the bottom cut-off; True widths are unknown if not noted; all VG samples are done with metallic screen assays; pending assays in holes 46, 59, 66, 66A, 76A, 82 did not return significant intersections; initial results did contain significant assays. Hole 87 was lost short of target. 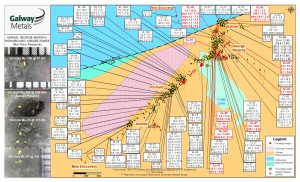 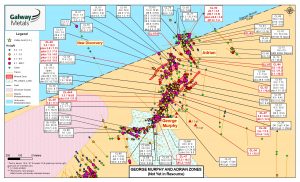 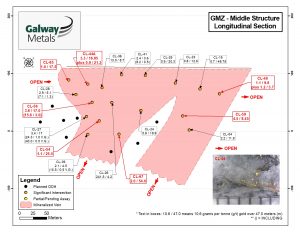