Veins to the north of the GMZ (first reported on February 13, 2020) are suddenly suggesting wide, high-grade content with the intersections of 20.2 g/t Au over 7.0m within a broader structure that assayed 4.8 g/t Au over 34.0m, plus 1.3 g/t Au over 9.5m in hole CL-50. Hole CL-84, drilled 35m to the east of hole CL-50, intersected significant visible gold (VG) (see Photos); assays are pending. The GMZ remains open for expansion in all directions; all zones at Clarence Stream remain open for expansion in all directions.

“Galway is really pleased with how all zones are expanding with nice widths and grades. The Company is following up on these and other results ahead of the release this summer of the Clarence Stream mineral resource update. With 6 rigs turning, and with a 7th on the way, Galway can complete in 6-months what took 3-years when we had just 1 rig at Clarence Stream. A similar situation exists at Estrades where Galway is drilling with 3 rigs vs just 1 in all previous programs. With 9 rigs currently turning, and a 10th on the way, Galway will be making a lot of news,” cites Robert Hinchcliffe, President and CEO of Galway Metals.

The GMZ, Richard and Jubilee are Part of the Same 2.5 km Long System

Galway’s George Murphy Zone discovery was initially reported in December 2017, but drilling stopped a year later following the discovery of the Richard Zone, which was first reported in January 2019. Drilling at the GMZ resumed a year later in mid-November 2019. The plunge of all zones to date in the Jubilee, Richard, and GMZ are thought to be to the west and are part of the same 2.5 km long system. The GMZ is 765m long to date, with multiple structures over 310m wide, and with all zones open in every direction.

The GMZ, Jubilee, Adrian, and Richard Zones have been discovered (or drilled) by Galway after the last resource estimate was released in September 2017. The discovery of these zones, and their subsequent expansions, demonstrate that Clarence Stream is an emerging new gold district in North America.

VG = visible gold. 0.42 g/t Au was used for the bottom cut-off; True widths are unknown if not noted; all VG samples are done with metallic screen assays 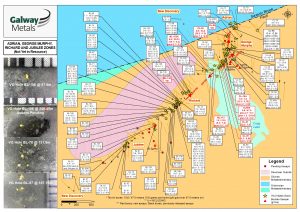 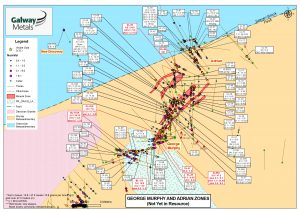 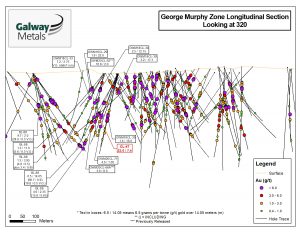