(Toronto, Ontario, February 10, 2021) – Galway Metals Inc. (TSX-V: GWM) (the “Company” or “Galway”) is pleased to announce that it has begun its 2021 drill program at its Estrades property in the Northern Abitibi of western Quebec (Figure 1). Three drills have begun a 10,000m programme targeting the 3 primary horizons of mineralization, including:

Robert Hinchcliffe, President and CEO of Galway Metals said, “While Galway’s Clarence Stream gold project remains the Company’s flagship, we are excited to be exploring Estrades more aggressively following the recent run-up in copper and zinc prices and continued strong gold and silver prices. The majority of our 2021 drill program is aimed at making new discoveries, either along the Casa Berardi gold trend, or along the Estrades and Newiska VMS horizons. VMS deposits throughout the world occur in clusters, and we are setting out to make new discoveries on our district-scale, 20,000-hectare property.”

Galway acquired an undivided 100% ownership interest in the claims located approximately 95 km north of the town of La Sarre in August 2016. An NI 43-101 Technical Report on the “Mineral Resource Estimate for the Estrades Project, Northwestern Quebec, Canada” dated November 5, 2018, with an amended date of March 15, 2019, was prepared by Roscoe Postle Associates (RPA), provided here or SEDAR profile at www.sedar.com. A summary of the Estrades Mineral Resource Estimate is provided in Table 1, below. From gold and zinc equivalent perspectives, the Estrades mine contains:

The Estrades deposit was previously mined via a 200-metre deep ramp, with production in 1990-91 totaling:

Mike Sutton, Chief Geologist of Galway Metals said, “For the first time since acquisition, Galway Metals is going to drill a few of the better gold targets along the Casa Berardi Break. Additional targets include gravity highs coinciding with strong conductors from geophysics located along the preferred host rocks for VMS deposits. Some deeper drilling will aim for deep conductors/gravity anomalies where copper and/or zinc feeder systems may exist below the mine and east, west, and south of it.”

Priority Drilling Targets to be Followed Up:

Notes: co-ordinates can be found in previous press releases and at Estrades Maps, Sections, and Tables..

The TITAN geophysical survey undertaken by Quantec Geoscience for Galway appears to indicate that this new zone is continuous to depths greater than 2,000 metres on three lines covering 400 metres of strike length (Figure 2). These results are within the chargeability high and resistivity low anomaly identified by the Titan survey. The MT-referenced IP chargeability models show clear high responses to their maximum depths of 750 m, while the MT-referenced EM resistivity models show clear low responses as continuous structures to depths greater than 2,000 m.

A Gravity survey at Estrades covered all three major trends (Estrades, Casa-Berardi, and Newiska); numerous gravity high anomalies are unexplained and could represent massive sulfides concentrations. The mine was identified by the gravity survey, as a gravity high (more dense than surrounding rocks), and so other gravity highs within rhyolite rocks are high-priority targets.

Both TITAN conductors and gravity highs in the Newiska rhyolite volcanic rocks are targets, especially in areas where previous drilling has identified strongly anomalous zones of mineralization indicating “smoke” and potential for big plumbing systems.

Galway’s Casa Berardi property is located 24 km along strike to the east of the Casa Berardi mine (owned by Hecla Mining), which has produced approximately 2.45 million ounces (mm oz) of gold grading 6.6 grams per tonne (g/t), and has Proven and Probable Reserves of 1.72 mm oz grading 2.9 g/t Au, Measured and Indicated Resources of another 1.06 mm oz grading 3.7 g/t Au, and Inferred Resources adding a further 0.97 mm oz grading 2.3 g/t Au. In addition, Galway’s Casa Berardi property is located adjacent to the west of Agnico Eagle and Maple Gold’s Douay joint venture property, which hosts Indicated Resources of 0.42 mm oz grading 1.52 g/t Au, plus Inferred Resources of 2.35 mm oz grading 1.03 g/t Au. Agnico has agreed to spend $18 million exploring the Douay JV property in the next 4 years. Given the significant production history and future of the mine to the west, plus the significant resource and additional exploration expenditures being made to the east, Galway considers its major and underexplored Casa Berardi Fault System to be a high-priority target for new discoveries. The 31 km of Casa Berardi Break that Galway acquired has had 92,878 metres of drilling in 314 drill holes, of which Placer Dome drilled a significant portion.  Galway is primarily targeting deeper areas under the better previous intersections, especially where they coincide with gravity high anomalies identified by the gravity geophysical survey.

Taibi sedimentary rocks are composed of sandstone, siltstone, greywacke and argillite. The unit hosts the Casa Berardi Fault, a four-metres wide graphitic fault with quartz-carbonate veining. Iron formation occurs in the southern portion of the sedimentary package and is evident on magnetic maps as a series of magnetic highs traversing the centre of the property block. This iron formation consists of fine-grained alternating laminae and beds of magnetite and chert. The Casa Berardi sediments are variably sericitized and carbonatized. The alteration increases toward the Casa Berardi Fault where the sediments are strongly sericitized and contain up to 20% ankerite and locally, pyrite, arsenopyrite-bearing, smoky to dark quartz veins containing pyrite and arsenopyrite. Anomalous gold occurs locally.

For Newiska and Estrades horizon geology and mineralogy, a description can be found at Estrades Project – Galway Metals (galwaymetalsinc.com).

Estrades was an operating mine with concentrates produced via toll milling at Matagami, located 128 km by road to the east. Recovery rates using conventional methods of crushing, grinding, gravity, flotation and cyanidization were 93% Zn, 90% Cu, 86% Pb, 78% Au and 63% Ag. After milling was completed, Breakwater transported the concentrates 290 km south to Rouyn-Noranda for smelting.

Preliminary analysis indicates that no metal is dominant; however, Au and Zn are the largest contributors. 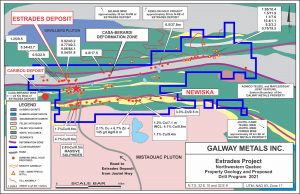 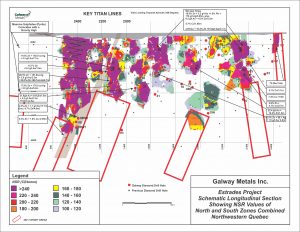