(Toronto, Ontario, January 6, 2021) – Galway Metals Inc. (TSX-V: GWM) (the “Company” or “Galway”) is pleased to report assay results from a new discovery from wildcat exploration drilling at the Company’s Clarence Stream project in southwest New Brunswick, Canada. This hole, the first in the area, is located 900m NW and likely along a different trend than the discovery hole in the previously-reported New Discovery (now named the Adrian Zone) of 13.4 grams per tonne (g/t) Au over 12.95 metres (m). The new discovery intersected 4.8 g/t Au over 3.1m in sediments between two intrusions (20m away from one) and is controlled by a fault (Figure 1).

In the other hole being reported, an intersection of 9.4 g/t Au over 0.5m with visible gold (VG) was returned from a stepout hole located 400m east of the previous eastern limit, and along strike of the GMZ. The intervening 400m is the continuation of the soil anomaly that led to the discovery of the GMZ in December 2017, and has not yet been drilled. Results from this hole cover a core length of 6m that were RUSHED out of the 391.5m total; the balance of this hole remains pending.

Given the three new discoveries Galway has made in recent months (13.4 g/t Au over 12.95m, 186.5 g/t Au over 0.6m and 4.8 g/t Au over 3.1m), which are now targeted for follow up drilling, plus the highly prospective claims recently acquired that the Company plans to drill (August 25, 2020), plus the goal of completing the drill program for the pending resource update, Galway has decided to expand its drill program at Clarence Stream to 7 rigs from 5. The 6th rig is expected to arrive in January and the 7th in February. This drilling, which will result in an increase in the 2020-21 program to 100,000m from 75,000m, is expected to further demonstrate that Clarence Stream is an important new gold district in North America.

“The number of gold bearing zones -eight- that have been intersected when drilling gold-in-soil anomalies at Clarence Stream is impressive. With 5 rigs turning, and 2 more on their way, Galway is looking forward to following up to expand the new discoveries and to drill the dozens of other stronger anomalies on the property,” cites Robert Hinchcliffe, President and CEO of Galway Metals.

The 4.8 g/t Au over 3.1m New Discovery intersection is located in sediments between two intrusions and is controlled by a fault. It was originally drilled to test a 61 ppb soil anomaly that coincided with a strong linear magnetic low, and is in quartz veining with associated 1-3% pyrite, pyrrhotite, and arsenopyrite. It is located 20m south of the contact with a granite. This is a similar setting, and with similar geochemical/geophysical signatures, as all the other intrusion-related gold deposits and discoveries at Clarence Stream. Several other intersections in the hole were anomalous for gold, such as 102 ppb over 6.0m (including 391 ppb over 0.9m).

The 9.4 g/t Au over 0.5m intersection with VG (see photo) is located in 1.1m of 10% quartz stringers with 2% pyrite + pyrrhotite in sediments. Galway is looking forward to drilling the intervening 400m gap between this intersect and the eastern-most extent of the GMZ, which could result in the GMZ being extended by 50% to more than 1.1km in strike length. The GMZ is 765m long to date (excludes this 400m stepout intersect), with multiple structures over 310m horizontal thickness (width), and with all veins open in every direction. Soil anomalies, in conjunction with glacial till and stream sediment anomalies led to the discovery of all 5 known gold deposits at Clarence Stream, and the property hosts many other as of yet untested gold anomalies. The new Adrian Zone is located to the northeast of the GMZ.

As Galway continues to make new discoveries, it is becoming apparent that Clarence Stream is an important new gold district in North America.

** previously released; VG = visible gold. 0.42 g/t Au was used for the bottom cut-off; True widths are unknown if not noted.

The discovery of the Richard Zone in hole 12 contains elevated levels of bismuth, arsenopyrite, and antimony, in multiple quartz veins, with tungsten in the vicinity. This is similar to other Clarence Stream deposits, which can be characterized as intrusion-related quartz-vein hosted gold deposits. The Richard Zone contains multiple zones of quartz veining with sulfides and sericite alteration. In general, mineralization at Clarence Stream consists of 10-70% quartz stockworks and veins with 1-5% fine pyrite plus pyrrhotite plus arsenopyrite plus stibnite in sericite altered sediments. The Jubilee mineralization consists of 2%-5% disseminated pyrite, sphalerite, galena, arsenopyrite, chalcopyrite, and pyrrhotite in sediments with white to smoky grey quartz veining. Locally there is up to 10% sphalerite and semi-massive galena veinlets. The 2.5 km trend that hosts the GMZ, Richard and Jubilee Zones contains a mineralized mafic intrusive locally – similar to the South Zone, which currently hosts most of the property’s last reported gold resources (September 2017). A more complete description of Clarence Stream’s geology and mineralization can be found at www.galwaymetalsinc.com.

Michael Sutton, P.Geo., Director and VP of Exploration for Galway Metals, is the Qualified Person who supervised the preparation of the scientific and technical disclosure in this news release on behalf of Galway Metals Inc. All core, chip/boulder samples, and soil samples are assayed by Activation Laboratories, located at 41 Bittern Street, Ancaster, Ontario, Canada, and/or Agat Laboratories, located at 5623 McAdam Road, Mississauga Ontario, Canada L4Z 1N9 and 35 General Aviation Road, Timmins, ON P4P 7C3. All three labs have ISO/IEC 17025 accreditation. All core is under watch from the drill site to the core processing facility. All samples are assayed for gold by Fire Assay, with gravimetric finish, and other elements assayed using ICP. The Company’s QA/QC program includes the regular insertion of blanks and standards into the sample shipments, as well as instructions for duplication. Standards, blanks and duplicates are inserted at one per 20 samples. Approximately five percent (5%) of the pulps and rejects are sent for check assaying at a second lab with the results averaged and intersections updated when received. Core recovery in the mineralized zones has averaged 99%. 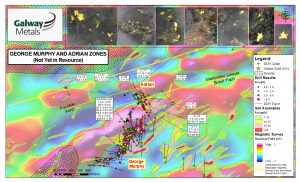