Galway Metals Intersects 2.1 g/t Au Over 38.75m, plus a New Vein in Western Extension of the GMZ at Clarence Stream

(Toronto, Ontario, September 30, 2020) – Galway Metals Inc. (TSX-V: GWM) (the “Company” or “Galway”) is pleased to report new drill results from the western extension of the George Murphy Zone (GMZ) at the Clarence Stream Gold Project in SW New Brunswick. These results follow-up on previously-released drill hole 88 that extended the zone 230m to the west and that returned three areas of visible gold with intersections of 6.5 g/t Au over 14.05 m, 9.7 g/t Au over 2.0m and 1.2 g/t Au over 11.0m  (Figure 1). The current drill results extend the GMZ a further 35m to the west to a total of 765m. The GMZ remains open for expansion in all directions – in fact, all zones at Clarence Stream remain open for expansion in all directions (Figure 2).

“The new results will greatly help to increase the resource estimation that Galway will undertake in the new year. The system is getting larger and new veins are being added. Drills are following up on Galway’s new discoveries to the east and west of 13.4 g/t Au over 12.95m and 186.5 g/t Au over 0.6m, which are on the two ends of the 3.7km mineralized corridor and remain open for further expansion. Drilling will also commence on our newly-acquired claims where a boulder field exists with boulders ranging up to 18.5 g/t Au, and where historical intersections such as 5.2 g/t Au over 2.5m and 3.7 g/t Au over 3.0m are located. These newly-acquired claims are 19 km west of the current resource at the South Zone, in geology that is a mirror image in all respects,” cites Robert Hinchcliffe, President and CEO of Galway Metals.

GMZ West Is Filling In Nicely

Assays Pending on 6 Additional Holes in GMZ West, and the Drill Has Moved Into the 650m GMZ-Richard Gap

Galway Made 4 Discoveries at Clarence Stream

Galway has made two new discoveries recently – one approximately 1.0 km SW and along strike of the Jubilee Zone, Clarence Stream’s western-most known deposit by intersecting 186.5 g/t Au over 0.6m, and the other new discovery 3.7 km to the NE with 13.4 g/t Au over 12.95m.

Galway’s George Murphy Zone discovery was initially reported in December 2017, but drilling stopped a year later following the discovery of the Richard Zone, which was first reported in January 2019. Drilling at the GMZ resumed a year later in mid-November 2019. The plunge of all zones to date in the Jubilee, Richard, and GMZ are thought to be to the west (further suggesting that all 3 are part of the same 2.5 km long system).

The GMZ is now 765m long, with multiple structures over 310m wide, and with all zones open in every direction. The gap between the GMZ and Richard Zones is now 650 metres, down from 1.0km originally. Galway is now drilling this gap as part of its 5 drill, 75,000 metre 2020-21 exploration program.

The 6.5 g/t over 14m is the second deepest intersection to date at 321m in any of the 3 zones along this trend – the Jubilee, Richard and George Murphy Zones, which cover 2.5 km of strike length (April 29, 2020 press release). An intersection of 10.0 g/t over 4.5m in the Richard Zone is located at 330m vertical (September 9, 2020 press release). These 3 zones are not included in the existing Clarence Stream resource, as two of them, the GMZ and Richard, were discovered by Galway after the last resource estimate was released in September 2017, but will be included in the Q1/21 update. These results, and those that precede them, demonstrate that Clarence Stream is an emerging new gold district in North America.

VG = visible gold. 0.42 g/t Au was used for the bottom cut-off; True widths are unknown if not noted; all VG samples are done with metallic screen assays 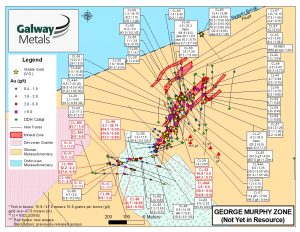 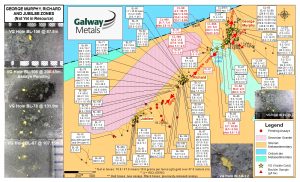