“Galway is very pleased with results from the new discovery in hole 65. The initial interpretation is that the intersect is not part of the 3.5 km trend that hosts the George Murphy, Richard and Jubilee Zones, or the other new discovery of 186.5 g/t Au over 0.6 metres ~1 km SW of Jubilee. These are all on the south side of the local intrusive in the area. Instead, it appears as if the gold mineralization in hole 65 trends along the north side of the intrusive, which would confirm Galway’s view that the intrusive is ringed on both sides with mineralization. The north side contains gold-in-till and soil anomalies in the same meta-sediment host rocks that exist on the south side, and the main structure that runs throughout the district, the Sawyer Brook Fault, is also interpreted to be on the north side of the intrusive. This fault is thought to be the main conduit for gold-bearing fluids to flow.

“Galway is currently drilling follow-up holes to the new discovery with the aim of turning it into a new deposit, and will soon conduct a similar follow-up drill program at the other new discovery located 3.7km to the SW. With over $20 million in cash, Galway is fully funded through the end of 2021 to complete its 75,000-metre drill program at Clarence Stream. The local intrusive that is thought to control the 3 deposits and 2 new discoveries is just one of many intrusives across Galway’s 65km land position, and they all have associated gold anomalies. We believe this underscores the potential of Clarence Stream as an important new gold district in North America,” cites Robert Hinchcliffe, President and CEO of Galway Metals.

The GMZ is 730m long to date (excludes the new discovery), with multiple structures over 310m horizontal thickness (width), and with all veins open in every direction (Figure 1). The new intersect that returned 13.4 g/t Au over 12.95m in hole 65 appears to be associated with a strong magnetic low and with a line of coincident soil anomalies, both located close to the interpreted location of the main structure on the property – the Sawyer Brook Fault (Figure 3). It directly underlies a soil anomaly that gave a grade of 19 ppb. The anomaly is present on the next line 100m to the east that gives it a strike along the magnetic low. It also lines up nicely with another soil anomaly located a further 320m east that grades 53 ppb. The anomalies extend for another 1.6 km east beyond that. They also extend 1.0 km SW of the vein, north of the local intrusive in the area. Soil anomalies, in conjunction with glacial till and stream sediment anomalies led to the discovery of all 5 known gold deposits at Clarence Stream, and the property hosts many other as of yet untested gold anomalies.

These two new discoveries are in addition to Galway’s previous discoveries of the George Murphy and Richard Zones, initially reported December 2017 and January 2019, respectively. 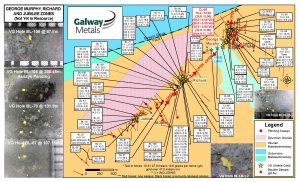 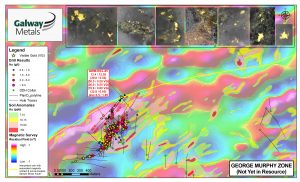 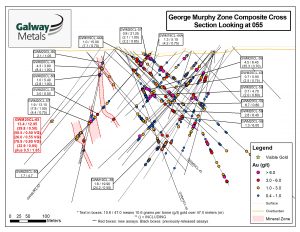