(Toronto, Ontario, June 24, 2020) – Galway Metals Inc. (TSX-V: GWM) (the “Company” or “Galway”) is pleased to report assay results from wildcat exploration drilling located 950m SW and along strike of the western-most intersection of the Jubilee Zone at the Company’s Clarence Stream project in southwest New Brunswick, Canada. That intersection had returned 1.9 grams per tonne (g/t) Au over 43.3 metres (m) (35.7m true width (TW), including 21.2 g/t Au over 2.35m), starting at a vertical depth of 36m below surface (September 5, 2019). The new discovery returned 186.5 g/t Au over 0.6m from a 35 cm quartz vein that contains very fine sulphides, including arsenopyrite. Another similar vein located 13m further downhole returned 2.2 g/t Au over 0.7m. The closest drill holes are located 270m to the SW and 560m to the NE. The one to the NE intersected 4.4 g/t Au over 1.0m and also contained 4050 ppm Bismuth and 344 ppm Tungsten (September 5, 2019). These results appear to be along the Jubilee—Richard—George Murphy Zone trend that Galway believes are part of the same 2.5 km-long mineralized system (Figure 1). These Zones have returned such intersects as 10.6 g/t Au over 47.0m, 1.4 g/t Au over 85.0m, and 6.2 g/t Au over 38.5m, among many others (refer to previous Galway Metals’ press releases). None of these 3 deposits are in the current resource.

New Discovery May Be Along the NE-SW Trend, the NW-SE Trend, or at the Intersection of Both

The new discovery appears to be located along the same NE-SW trend as the Jubilee—Richard—George Murphy Zones, which are located 950m to the NE. The new discovery is between those deposits and a strong 4km+ long soil anomaly that hosts 11 soils that returned between 100 and 681 ppb Au located 1,000m to the SW (Figure 2). This 4km+ soil anomaly, which is associated with a magnetic low (as are all deposits at Clarence Stream), has not yet been drilled. The new discovery (186.5 g/t Au over 0.6m) could also be trending along a strong, sub-perpendicular NW-SE (similar to the North Zone trend) soil and glacial till anomaly, or it could be at the intersection of both NE-SW and NW-SE trends. If the new discovery goes in a NW-SE direction, it would be along the same trend as the 2nd-highest glacial till anomaly (95 ppb Au) at Clarence Stream, which hosts boulders ranging up to 16.3 g/t Au. The 186.5 g/t Au assay, in a wildcat hole, is the 9th highest grade on the property.

Robert Hinchcliffe, President and CEO of Galway Metals, said, “The previously announced $17.35M private placement, which is expected to close within the next few days, will fully-fund Galway’s newly expanded drill program through the end of 2021 to 75,000m, up from 25,000m for 2020 only. In doing so, Galway will soon increase its drill count to 5 rigs, up from 3 previously, and up from 1 during the first 3 years of exploration since the Company’s acquisition of Clarence Stream in August 2016. This expanded program will enable the Company to drill the 3 zones not in resource, to expand the South and North Zones that are in resource but which haven’t been expanded in nearly 3 years, to follow-up on the new discovery and to make other new discoveries. Other plans for Clarence Stream include ore sorting and metallurgical testing, seismic and magnetic geophysical surveys, intensive prospecting and excavator trenching and stripping. With all 5 zones at Clarence Stream open in every direction, and with a multitude of existing drill targets outside the known zones, Galway is thrilled to be able to expand its drill program and unlock value for shareholders. Galway’s strong drill results demonstrate that Clarence Stream is an emerging new gold district in North America.”

Drilling the Gaps, Follow-Up on Recent Discoveries and Wildcat Drilling is Planned

Galway resumed drilling with 3 rigs at Clarence Stream in late May. Subsequently, a one-week delay was imposed due to extreme dry and hot conditions. Galway’s plan over the next several months is to continue drilling the 2 gaps between the 3 zones not in resource, to tighten drill spacings – generally to 50 metres for inclusion in the pending resource update, to follow-up on the recent new discoveries of multiple veins to the north of the GMZ, which includes 11.4 g/t Au over 2.0m in hole CL20-58 and to follow-up on the new 186.5 g/t Au discovery. In addition, further wildcat exploration drilling will ensue on the scores of soil and geophysical targets across the 65-km, 60,000-hectare property.

Galway will also add a sixth rig (doubling the current count of drills), to drill wide-diameter (PQ-size) core for both ore sorting and metallurgical tests of the 3 zones not yet in resource. Metallurgical tests have been conducted by previous operators on the North and South Zones, which returned recoveries in excess of 90% in both zones.

(TW=True Widths, which are calculated – sectional measuring may give slightly different numbers); True widths are unknown if not noted; V.G.=Visible Gold; 0.42 g/t Au was used for the bottom cut-off; *average gravimetric of 2 cuts on reject. 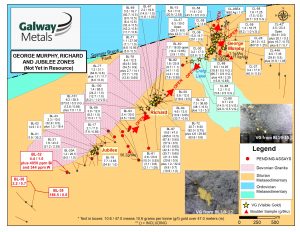 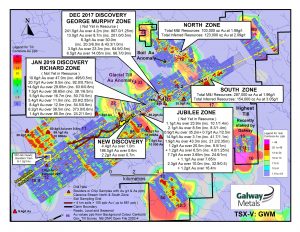 This release refers to a pending offer of securities which is being made outside of the United States exclusively to non-U.S. investors.  This release is not an offer to sell nor a solicitation of an offer to buy any securities in the United States or any other jurisdiction in which such offer is not legally permitted.  No subscription will be accepted from any U.S. Person.