(Toronto, Ontario, November 13, 2019) – Galway Metals Inc. (TSX-V: GWM) (the “Company” or “Galway”) is pleased to report assay results from drilling at the recent Richard Zone discovery, the Jubilee Zone, and some exploratory wildcat holes. The Richard Zone was first reported in January, 2019, and lies midway between the Jubilee Zone and the Company’s first discovery, the George Murphy Zone (initially reported in December, 2017). It is thought that all 3 zones (the George Murphy, Richard and Jubilee), which cover 2.5 km of strike length, are part of the same system. None of these zones are in the resource. (Figure 1)

Robert Hinchcliffe, President and CEO of Galway Metals, said, “The Richard Zone discovery hole returned 7.3 g/t Au over 36.7m, including 38.1 g/t Au over 6.5m, and the latest drilling has returned high grades over multiple wide zones. Galway Metals will continue to drill our new discoveries in order to maximize the resource that will be undertaken in early 2020. The new intersections represent step-outs of 54m to 91m to the west at Richard. Galway Metals believes that Clarence Strem, is an emerging new gold district in eastern Canada.”

With the interpretation of the horizontal trend (strike) for the Richard Zone as being identical to the NE trends of the Jubilee and George Murphy Zones (generally following the granite contact to the NW that might be the source of the gold-bearing fluids), and dipping south, the new intersections appear to line up with the middle of 3 vein zones at Richard.

The Jubilee Zone horizons appear to trend northeast, parallel to the granite intrusive located to the northwest. True widths for all drill holes to date at Jubilee have now been calculated, based on an interpreted horizontal trend (strike) of 50° and south dips of -52°. The George Murphy Zone, located 2 km northeast of Jubilee, is interpreted to have a similar horizontal trend (strike) but is steeper dipping. The newly-discovered Richard Zone is half way between. (Figure 1 and Figure 3).

Wildcat drilling was undertaken using the newly ordered third drill in two locations west of the resources from the South Zone. The two locations are 4.8 km and 1.5 km to the west and are interpreted to be extensions of the South Zone. The target at 4.8 km away trends parallel to high soil anomalies of greater than 300 ppb Au, and is located where boulders returned up to 56.2 g/t Au with visible gold. The target at 1.5 km away features soil, till, and geophysical anomalies and where a boulder was found that returned 35.5 g/t Au (Figure 3).

Three zones of mineralization were returned from the first hole (BL19-44)- two with significant widths of 20-40% quartz veining (18 and 22m) and 2% arsenopyrite, plus 5% pyrite, plus 5% pyrrhotite, and one zone being a mineralized gabbro dyke (similar to the South Zone) that returned up to 0.5 g/t Au over 1.15m. The third and northern-most structure appears to be the down-dip extension of the Jubilee Zone, while the southern two structures are on-strike with the South Zone. Assays are pending from other holes. A previous drill hole (GWM17CL-09) located midway between this hole and the South Zone (2.4 km from each) had intersected a similar 14.15m wide mineralized structure consisting of 10-20% quartz veining with up to 0.4 g/t Au over 0.65m. The drilling 1.5 km west of the South Zone also intersected quartz veining and altered gabbros. The best assay returned to date is 1.8 g/t over 1.0m in an altered gabbro. A strongly mineralized arsenopyrite-bearing quartz vein in hole SW-05 returned 0.6 g/t over 0.75m.

*previously reported; VG = visible gold. 0.42 g/t Au was used for the bottom cut-off for intersections except for Wildcat holes and the 0.32/25.7m in hole 72 (shown for information purposes); (TW=True Widths); True widths are unknown if not noted. Drill hole GWM-19BL-54, drilled west of the Jubilee Zone, and Wildcat holes GWM-19SW-02 and GWM-19SW-04, did not return significant assays.

The recent discovery of the Richard Zone in hole 12 contains elevated levels of bismuth, arsenopyrite, and antimony, with tungsten in the vicinity. This is similar to other Clarence Stream deposits, which can be characterized as intrusion-related quartz-vein hosted gold deposits. Richard Zone contains multiple zones of quartz veining with sulfides and sericite alteration. In general, mineralization at Clarence Stream consists of 10-70% quartz stockworks and veins with 1-5% fine pyrite plus pyrrhotite plus arsenopyrite plus stibnite in sericite altered sediments. A more complete description of Clarence Stream’s geology and mineralization can be found at www.galwaymetalsinc.com. 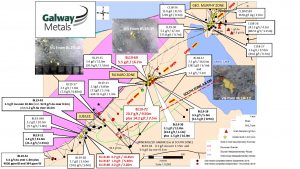 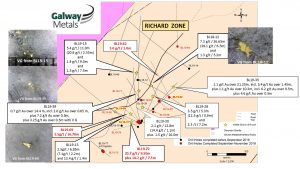 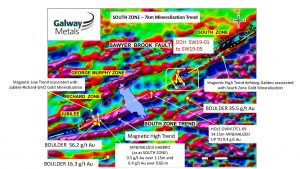