“While we are eagerly awaiting additional drill results from our new Richard Zone discovery located 1km to the west, we are very pleased that the George Murphy Zone, which Galway initially reported as our first new discovery in December 2017, is growing and contains significantly high-grade shoots; the 201 g/t nicely corroborates the previous result of 807 g/t,” cites Robert Hinchcliffe, President and CEO of Galway Metals.

The proximity to each other of two multi-hundred-gram intersections strongly suggests that a subvertical “shoot” exists. The identification of a shoot-like geometry is typical for gold deposits elsewhere in the world in orogenic gold systems. These mineralized shoots are important to the economics of deposits, and they tend to be continuous for long distances along their plunge. Hole 33, with an intersection of 7.2 g/t Au over 2.75m, extends the GMZ 10m west and 40m below hole 29, which intersected 1.9 g/t Au over 22.0m (including 16.9 g/t Au over 1.3m), which previously represented the western-most limit of the zone. Drilling has also extended the depth of the zone in this area with intersections of 2.1 g/t Au over 15.7m in hole 34, and 1.6 g/t Au over 14.0m in hole 35, with the intersect in hole 35 situated 75m below the 1.3 g/t Au over 10.3m in hole 17. Assays are pending for portions of holes 34 and 35.

The gold bearing structures at the GMZ have been drilled to a maximum of 265m vertical, although most drilling is down only to 130m. The GMZ is 500m long, with multiple zones over 160m horizontal, and with all zones open in every direction. Based on closely spaced drill holes on the east and west ends of the deposit, the zones appear to dip steeply to the south. The current interpretation may be subject to change; a small roll in the Main zone strike may be due to a fold, a fault offset, or there may be separate zones. In an effort to expand the GMZ further, additional drilling along the periphery of structures will take place following additional drilling of the Jubilee and Richard Zones.

Assays Remain Pending in the GMZ and Richard Zones

Assays remain pending on portions of holes CL18-34 and CL18-35 in the GMZ. Assays are also pending for portions of holes BL19-13 and BL19-15, and the entirety of hole BL19-14 in the new Richard Zone discovery that is centered between the George Murphy and Jubilee Zones, approximately 1.0 km from each (Figure 3). Assays previously reported from the Richard Zone were 7.3 g/t Au over 36.65m, including 38.1 g/t Au over 6.5m in multiple quartz veins containing abundant visible gold starting 36 metres vertical in hole BL18-12, and 5.4 g/t Au over 11.0m, including 20.9 g/t Au over 2.55m in hole BL19-15. This intersection contained quartz veining and visible gold in two places located approximately 50 metres horizontally NW of and 97 metres vertically below (133 metres total vertical depth) the initial discovery in hole BL18-12 (Figure 1).

The new Richard Zone discovery in holes BL18-12, BL19-13 and BL19-15 (February 26, 2019) represents the 2nd deposit that Galway has found since the Company began drilling Clarence Stream in October 2016 (the GMZ was the other), and the fifth deposit identified in the Clarence Stream district to date. Only two of these five deposits, the North and South Zones, are in the existing resource (September 26, 2017), which is scheduled to be updated in 2019. All five deposits remain wide open for expansion.

Core of VG from Clarence Stream and core from Estrades/Newiska will be on display at Galway’s PDAC Booth #2623A on Sunday and Monday, March 3rd and 4th.

** Previously released; VG = visible gold. 0.42 g/t Au was used for the bottom cut-off; True widths are unknown if not noted; The interval from 124.15-126.35m in hole 33 was added in because it is visually part of and cannot be distinguished from the mineralized zone.

In general, mineralization at Clarence Stream consists of 10-70% quartz stockworks and veins with 1-5% fine pyrite plus pyrrhotite plus arsenopyrite in sericite altered sediments. A more complete description of Clarence Stream’s geology and mineralization can be found at www.galwaymetalsinc.com.

Michael Sutton, P.Geo., is the Qualified Person who supervised, read and approved the preparation of the scientific and technical disclosure in this news release on behalf of Galway Metals Inc. All core, chip/boulder samples, and soil samples are assayed by Activation Laboratories, 41 Bittern Street, Ancaster, Ontario, Canada, who have ISO/IEC 17025 accreditation. All core is under watch from the drill site to the core processing facility. All samples are assayed for gold by Fire Assay, with gravimetric finish, and other elements assayed using ICP. The Company’s QA/QC program includes the regular insertion of blanks and standards into the sample shipments, as well as instructions for duplication. Standards, blanks and duplicates are inserted at one per 20 samples. Approximately five percent (5%) of the pulps and rejects are sent for check assaying at a second lab with the results averaged and intersections updated when received. Core recovery in the mineralized zones has averaged 99%. The soil anomalies may not be representative of the mineralization hosted on the property. 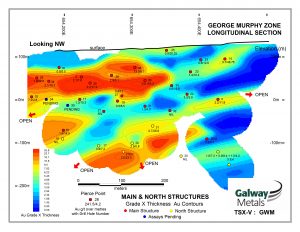 Figure 3: Location of the New Discovery Zone and the 56.2 g/t Au Grab Sample 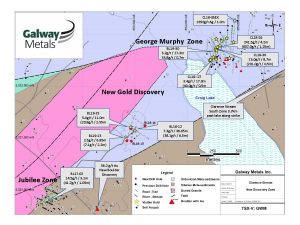